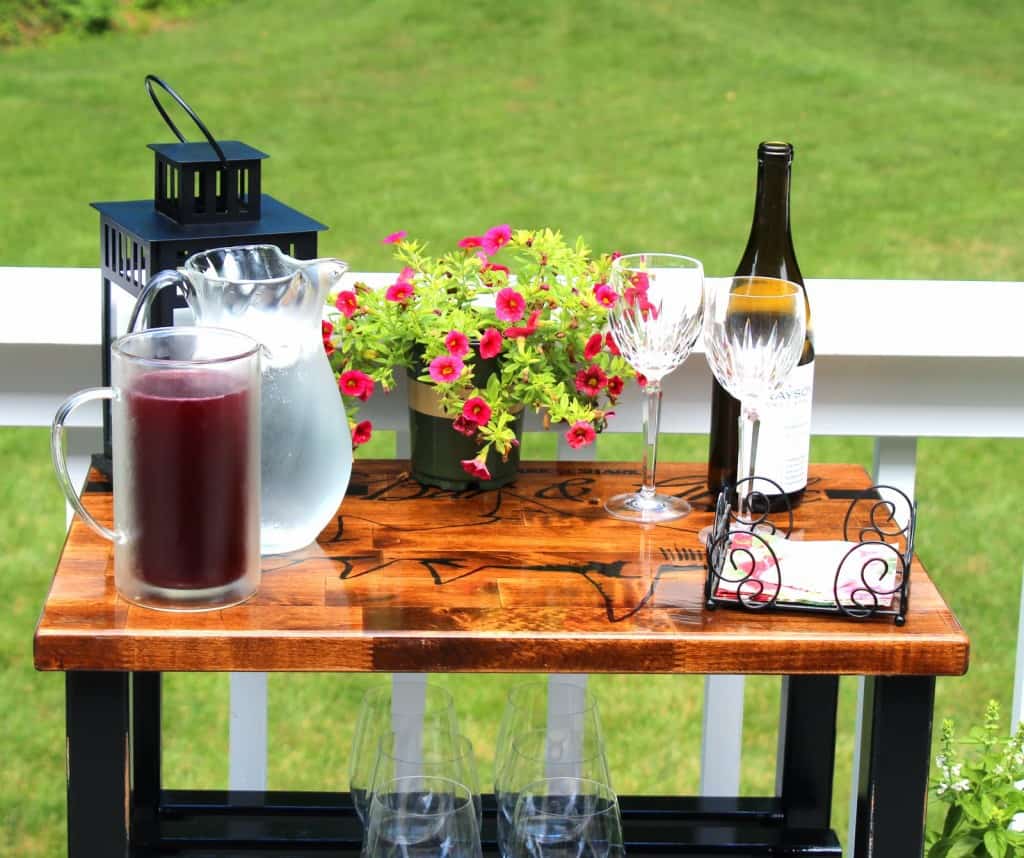 First there was the Art’s Market table,
and now there is the Mark The Shark 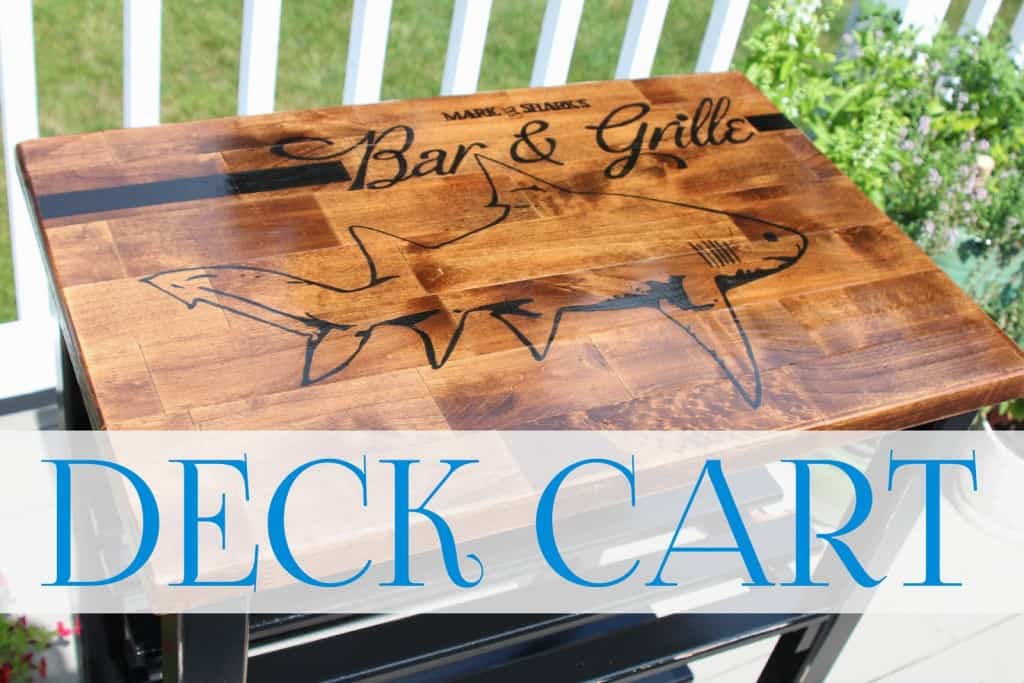 I mentioned recently that I had to sell my beloved changing table-bar cart for lack of space. I was so looking forward to using it on our deck this summer, but after the bookcases were installed there was just not enough space for the cart when I needed to store it inside.

A few weeks ago I came upon this cute little cart at a yard sale. It’s perfect for our deck in the summer, and small enough to store in the garage in the winter. 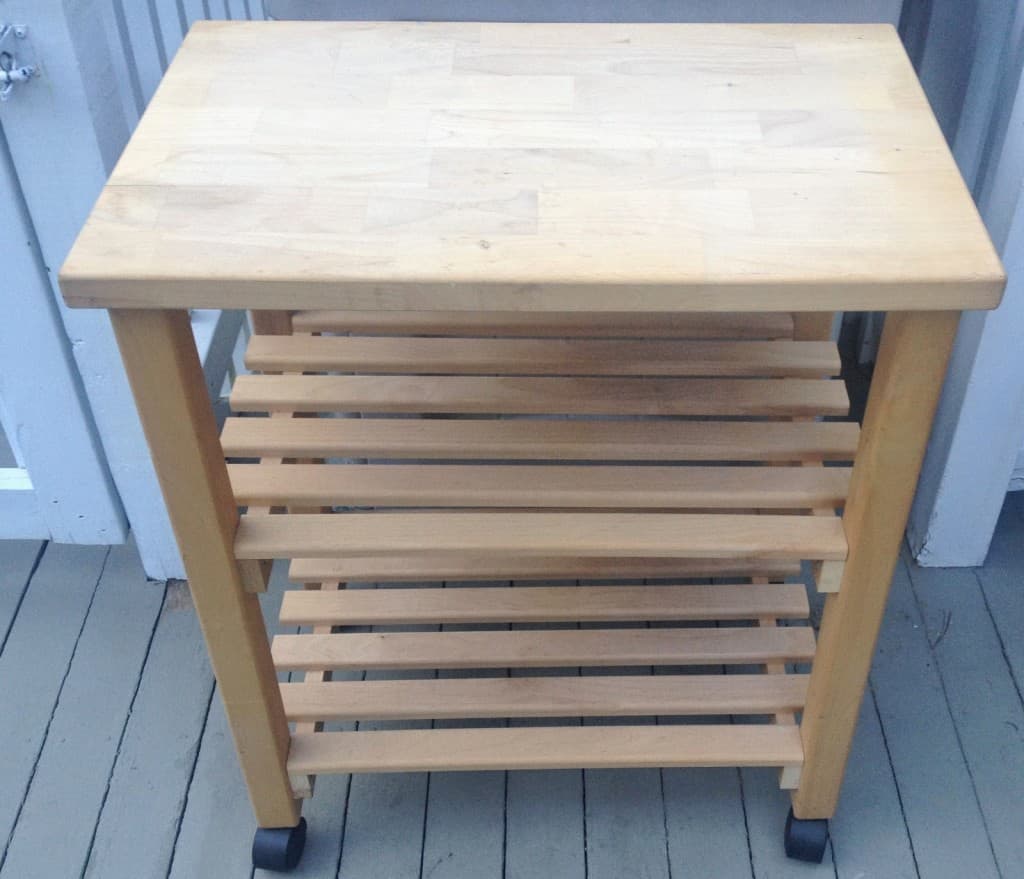 It was unfinished, so in order to use it outside it needed to be sealed. And also – hello blank canvas! It was just begging to be made over into something fun. I couldn’t wait for the opportunity to tackle this one.
I taped off the casters and the top, and primed every nook and cranny. Whenever you are painting a bare piece of furniture it’s really important to prime it first, and if it’s going outside I highly recommend starting with an oil based primer to stand up to the elements. 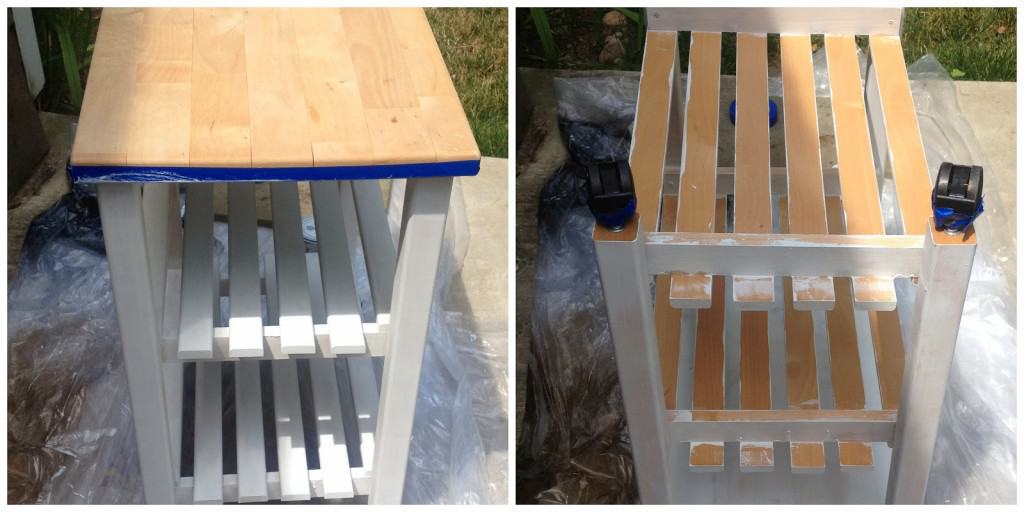 After priming, the cart got a few coats of latex paint that I applied with my new little Critter. More on how I like this paint sprayer in the near future. 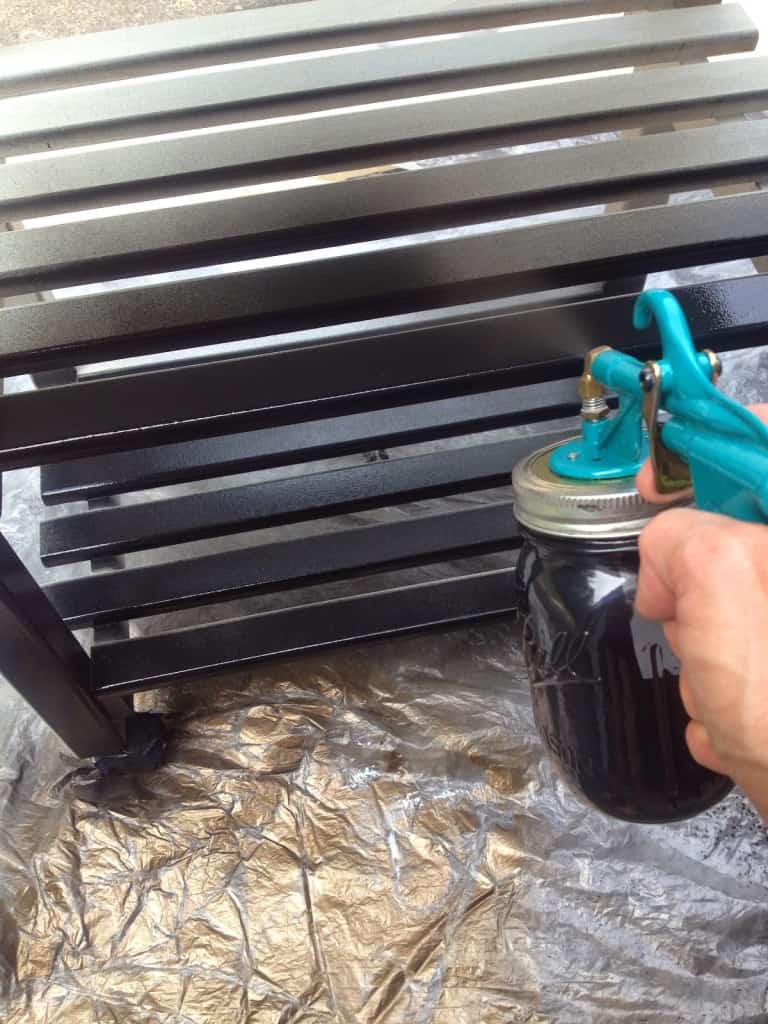 Then the fun part – adding a graphic.

My intention with the cart was to have a place for beverages so guests could help themselves, but Mark envisioned using the cart next to the grille as a place to set platters of burgers and dogs and such as he cooked them. Thus, the idea for some kind of graphic containing the words BAR & GRILLE was born inside my crazy head. Some of our friends and their kids refer to Mark as Mark the Shark, and I thought it would be kinda humorous to incorporate that in some way too. I found some shark images online, then played around with different fonts and placements in Powerpoint until I came up with this graphic below, which I uploaded to Block Posters to enlarge and then printed out (you can also blow it up in Word). 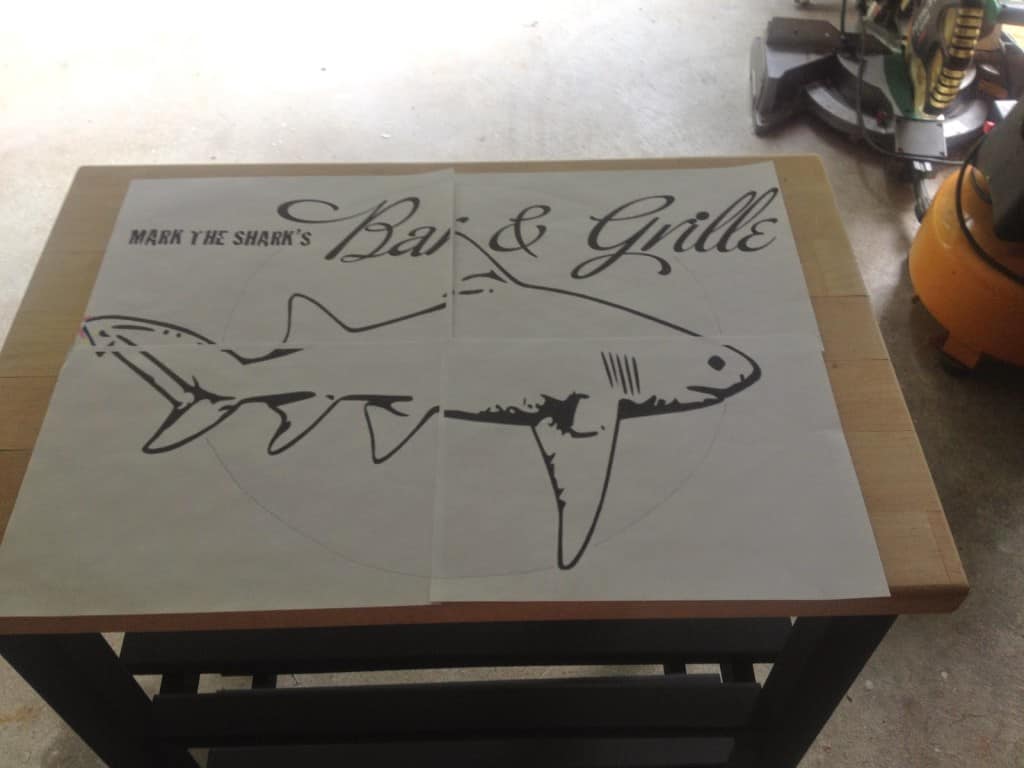 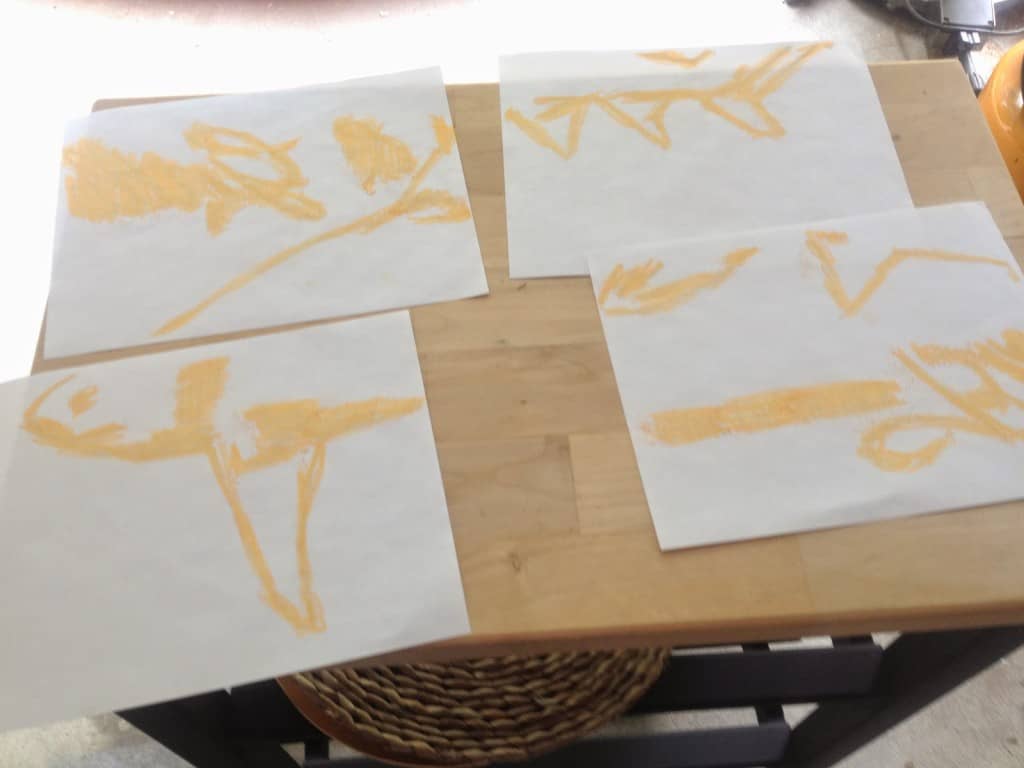 – and the graphic traced onto the top of the cart. 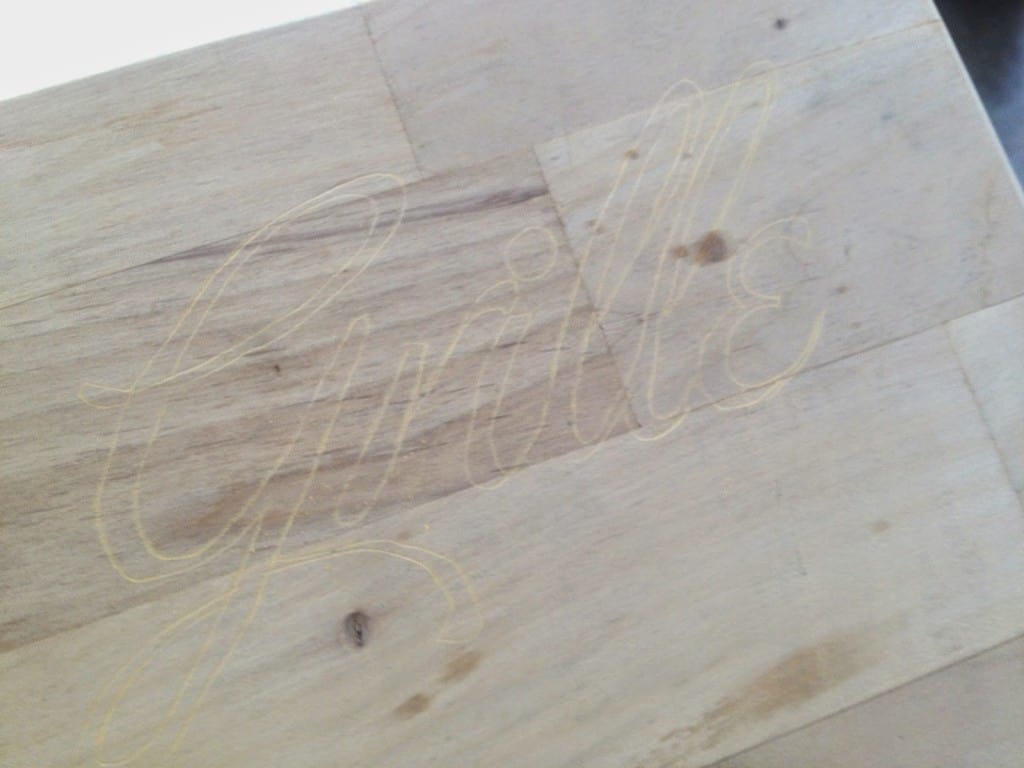 Next up, going over the chalk with a black Sharpie. A Sharpie is a magical tool for transferring images, but keep in mind it’s super helfpul to have a FINE Sharpie on hand for the details. I couldn’t find mine, and I was too eager beaver to wait, so the fine details are lacking a bit, but that’s okay.

Whenever I blow up an image or text to transfer, I find it helpful to refer back to the image as a whole. Sometimes parts of the graphic are cut off when you print over several pages, so you have wing it a bit. 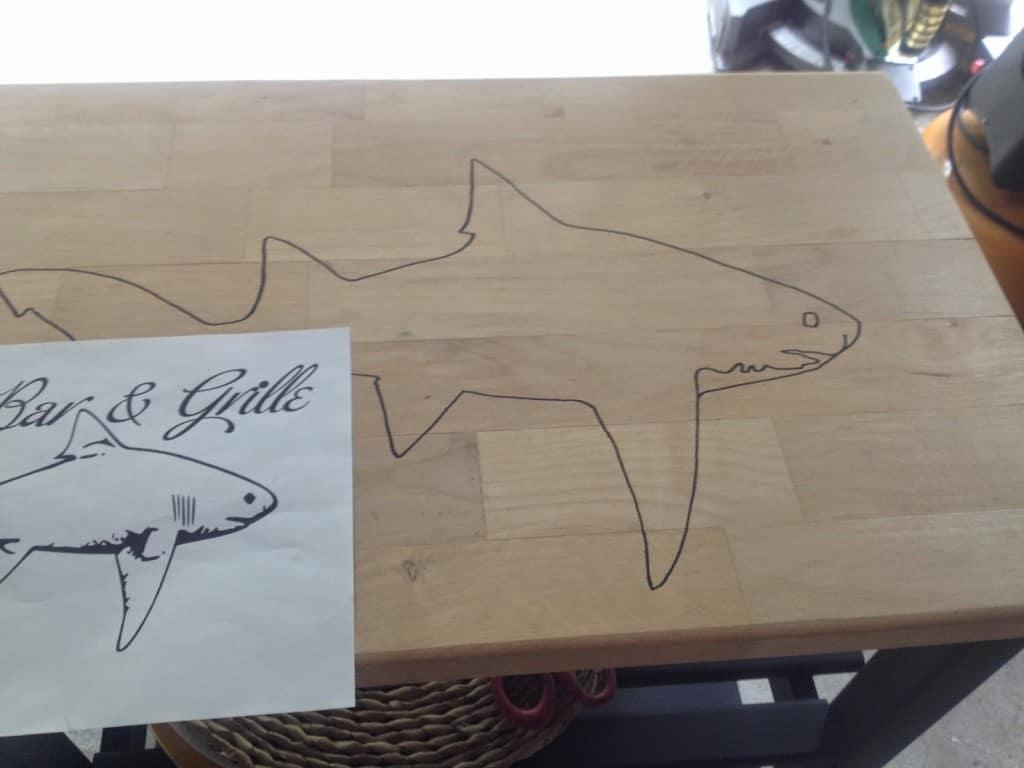 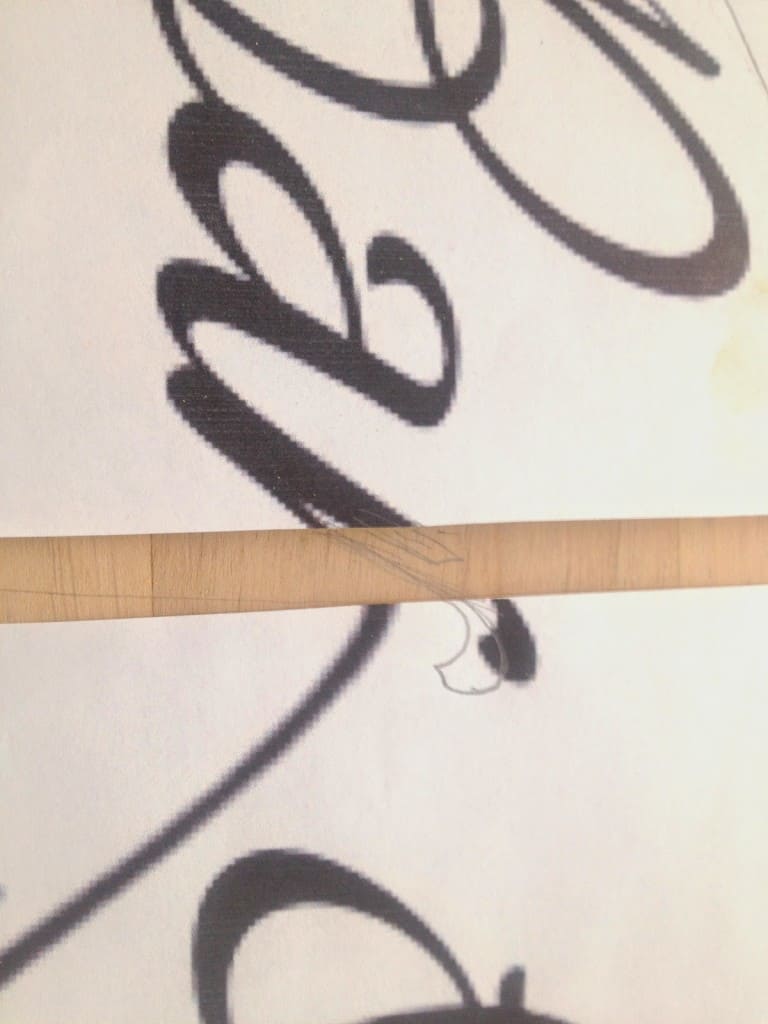 All was going well with my transfer until I traced “Mark the Shark” and then filled it in with the Sharpie. I don’t have pictures of this, but the first font I used is irregular and when traced, came out looking like I had 3 glasses of sangria before writing it. Actually maybe I SHOULD have had 3 glasses of sangria first, it might have come out better!

So….a little improvising was necessary, as is often the case in such projects. 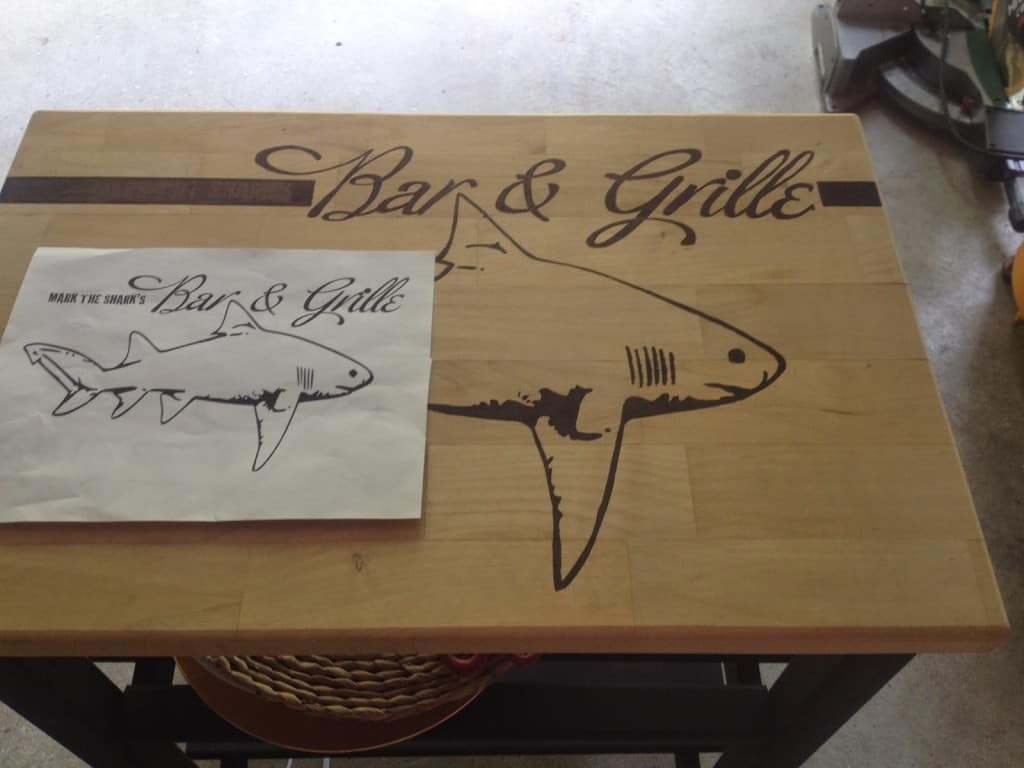 My second attempt at “Mark The Shark” went a little better, although not perfect. This is where the fine Sharpie would have come in handy. The smaller the font, the more definition. Also, when using a Sharpie on bare wood there is a bit of bleeding so the fine tip helps to control how much ink is making contact with the wood.

After the Sharpie ink dried for an hour or two, I gave the top of the cart a coat of stain (Minwax Provincial). I also distressed the body a bit, and then coated the whole piece, every nook and cranny, top and bottom, up and down, with oil based Spar Urethane (the same stuff I sealed my outdoor teak furniture with), coating twice and sanding lightly between coats.

The Clear Satin Spar Urethane (also by Minwax) goes on super shiny, but the sheen fades over time.

The urethane also fills in and evens out imperfections and indentations on the surface – for example, where I colored over the original Mark The Shark is not even visible after being sealed. 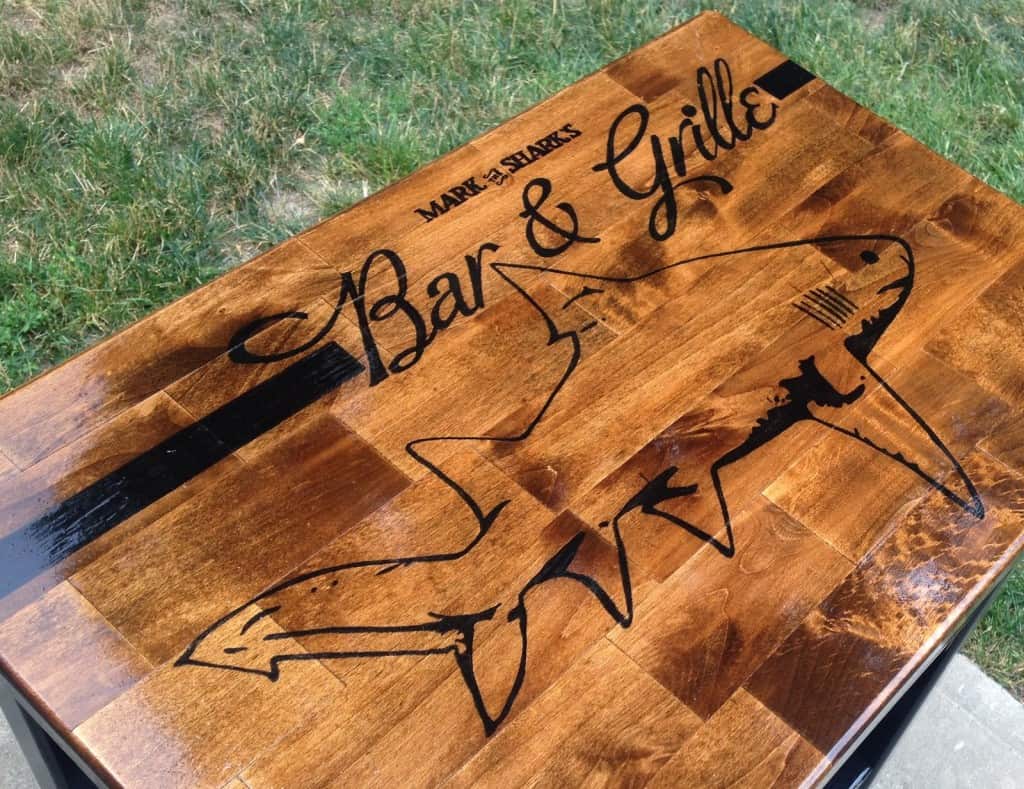 It was really fun to turn something functional, but plain, 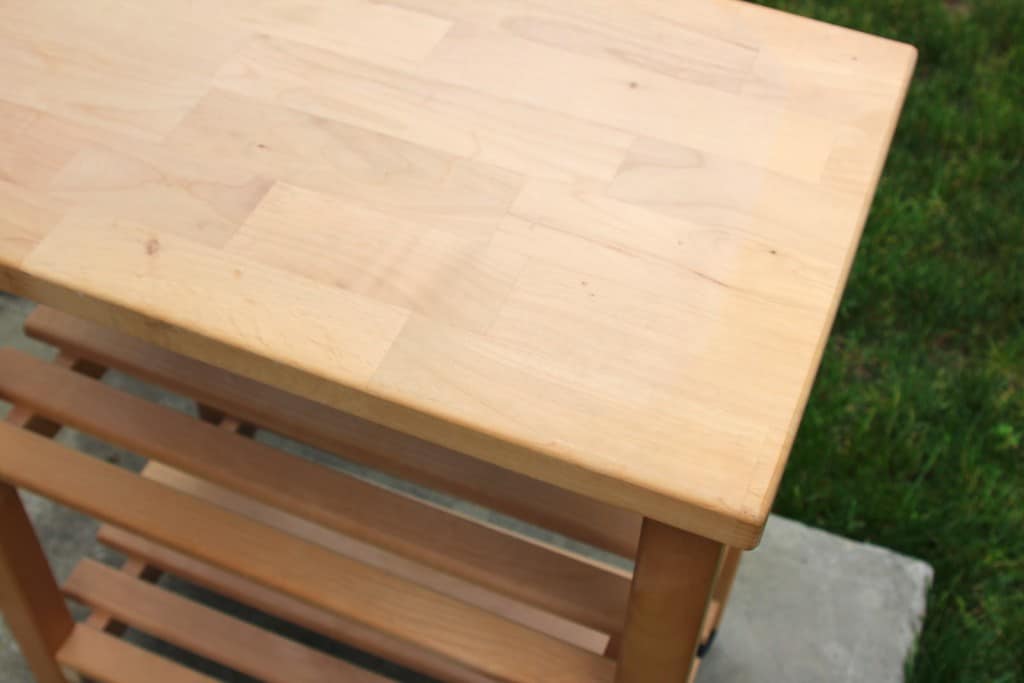 into a piece with a little personality! 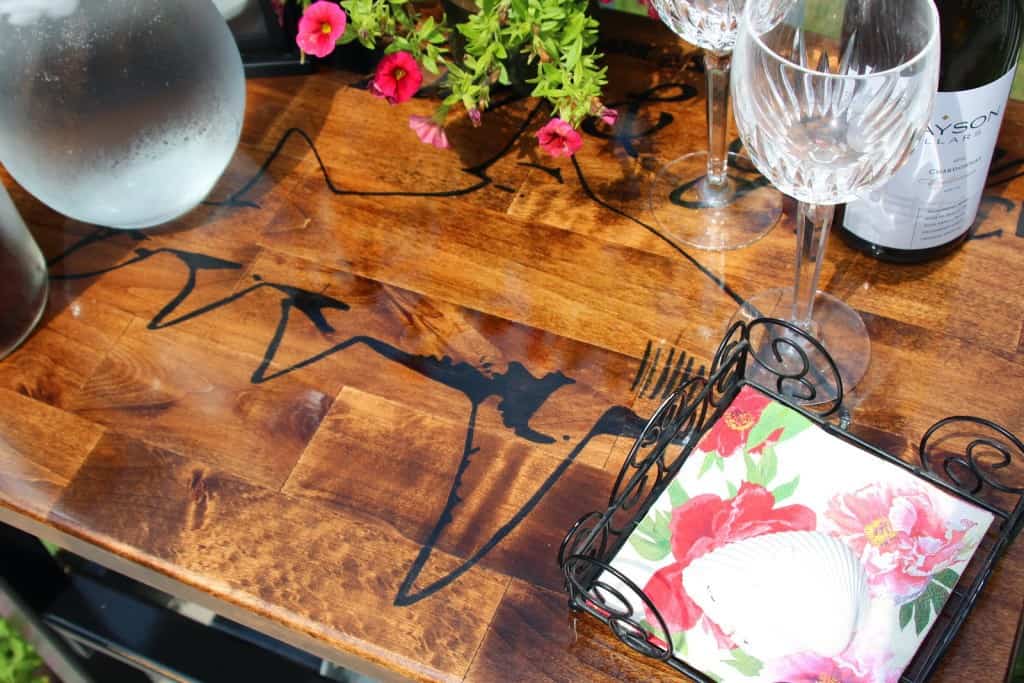 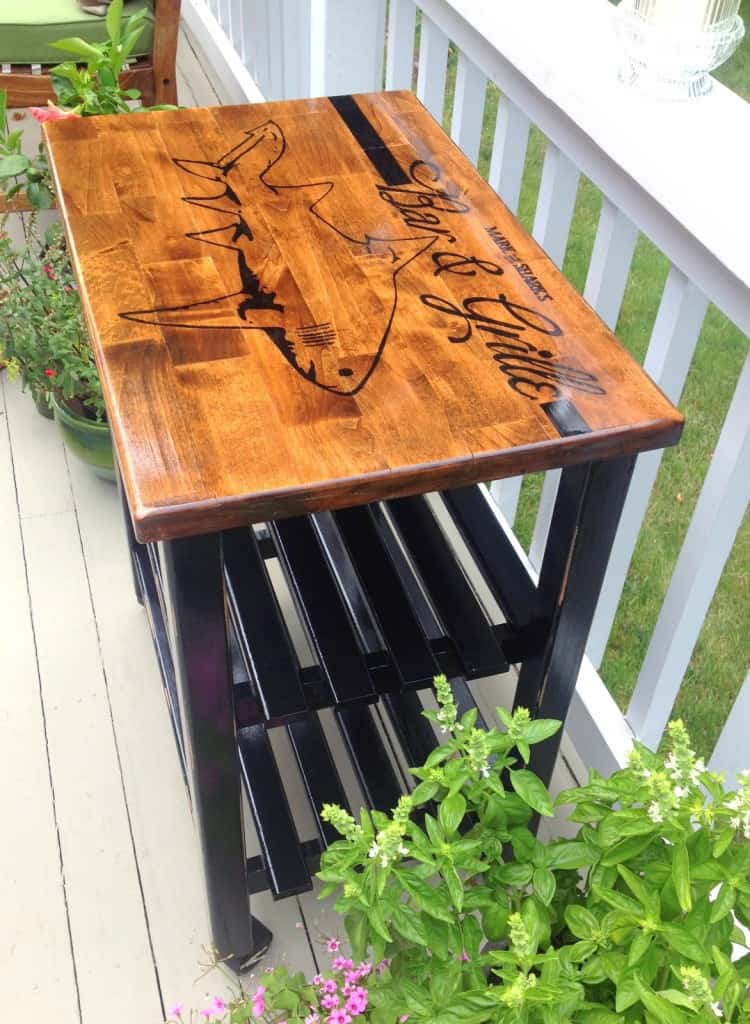 If you’re a font junkie like I am, these are the fonts I used with links to where you can download them.
MARK z     SHARK’S
“Mark” and “Shark’s” – FoglihtenNo07
“the”  – Bergamot Ornaments lowercase z
(Check out this handy printable Bergamot Ornaments guide by Rachel Myers!) 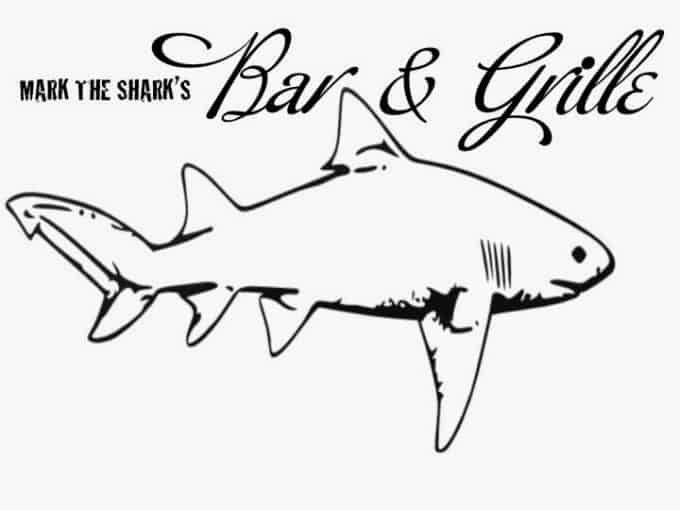 “Bar & Grille” – Buffet Script
(The first Mark the Shark is in what used to be called Cracked but is now called the very classy Crackhouse. I like this font but don’t recommend it for transferring images.)
If Mark gets the cart for grilling purposes, 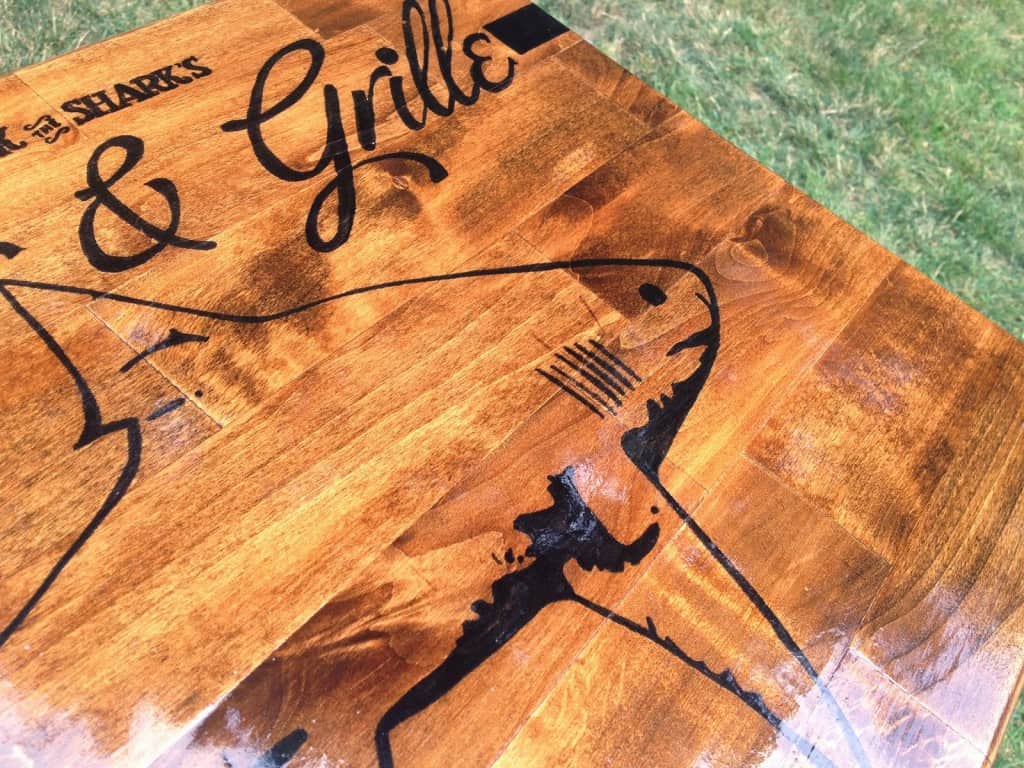 I think the rest of us need matching t shirts, don’t you? 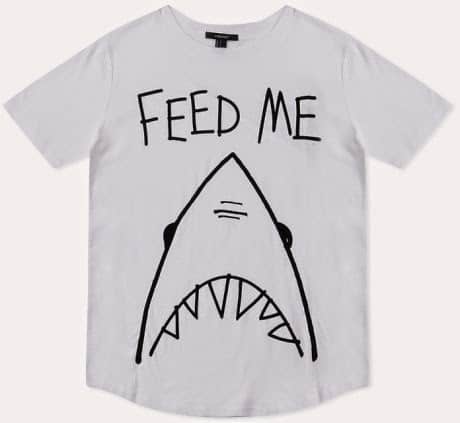