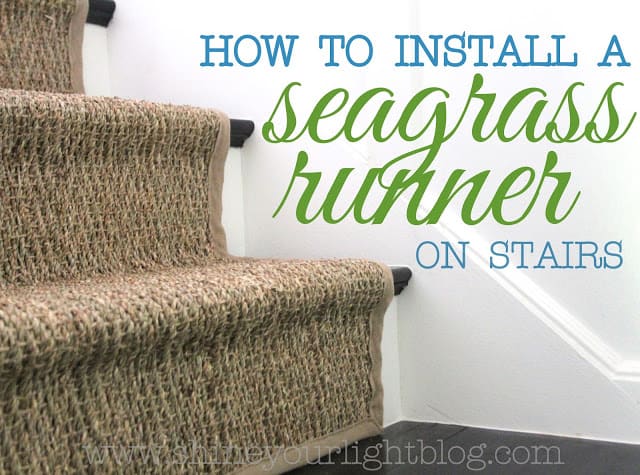 A seagrass stair runner was part of my vision from the moment we saw this house in all it’s orange oak and shades-of-peach glory.

The angels sang the day I tore out the vile, pet-stained runner that came with the house. With a little elbow grease {and a lot of paint :)}…….. 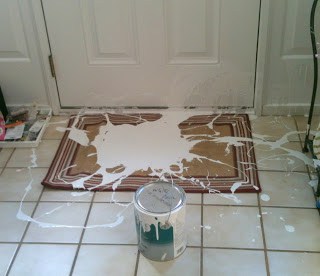 …..the foyer joined the new millenium. 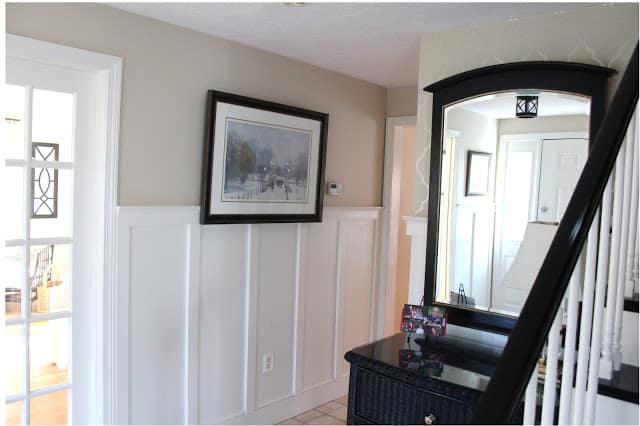 Two big things I really wanted to conquer this year:  ripping out the 80s tile floor in this foyer, and installing a seagrass runner on the stairs.

Well, the tile isn’t going anywhere until our kitchen gets remodeled (since the kitchen will need knew flooring too, and why suffer twice?), but at long last, the seagrass runner is checked off the list.

I was a bit worried that the seagrass’ thickness would make it difficult to work with, but really the hardest part was cutting the runner perfectly straight. Working with a natural fiber such as seagrass, sisal or jute does pose some minor issues, so in case there is anyone out there who would like to use this material for a stair runner, here is a tutorial. This is truly a pretty easy project that I did myself.

HOW TO INSTALL A SEAGRASS RUNNER ON STAIRS

•  runner:  for the runner, measure your stairs (treads and risers) and purchase a runner that is a little longer than necessary. I have 11 treads and 13 risers and bought a 20’ runner. I ended up with about 2 feet leftover after making two cuts, but I’m glad I had some excess in case I made a mistake somewhere.

•  fastener:  I used a pneumatic stapler hooked up to my compressor, and 3/4″ crown staples. You could also use an electric stapler.  I don’t recommend a hand-held manual staple gun (like this one that I use for upholstery projects) because you will be putting in a LOT of staples. Holy hand cramp.

CUT PAD
Cut non-slip pad into pieces for each tread, a bit shorter in width than your runner, and place on the treads. 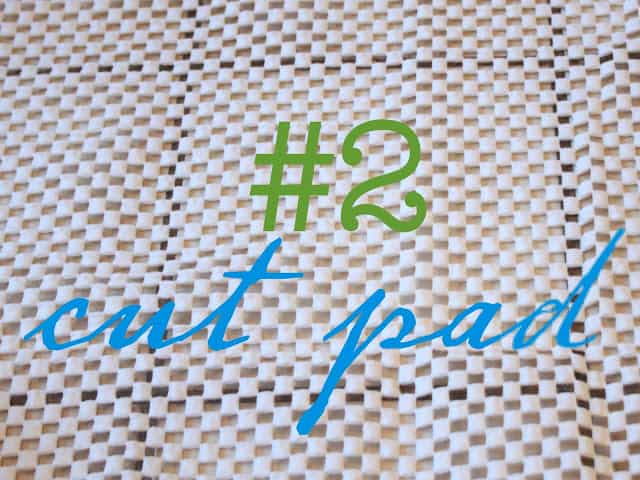 Unroll runner and secure at the top of the stairs (preferaby have another person hold the runner at the top.)  I recommend unrolling the runner before measuring out guidelines (#4). Stairs with spindles can play tricks on your eyes and you should visually see where the runner should fall, rather than just measure and staple. I learned this the hard way! 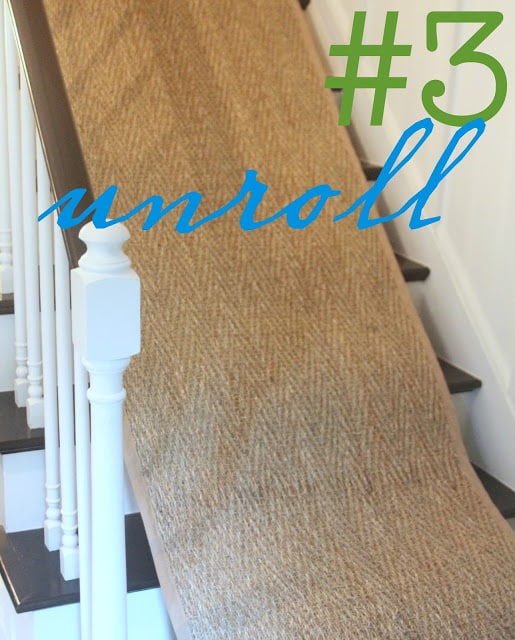 Measure and use painters tape as a guide on one side of the staircase (treads and risers). Use the tape to line up the runner as you work so it stays evenly spaced in the middle of the stairs. It’s very easy to let it get crooked without a guide (ask me how I know.)

When I first started I was actually off center by an inch or two and had to rip out the whole step and start again (and if you have to do this, seagrass is very forgiving. I just literally yanked it off, banged the staples into the riser, and started over – any pulled fibers on the runner were not visible! 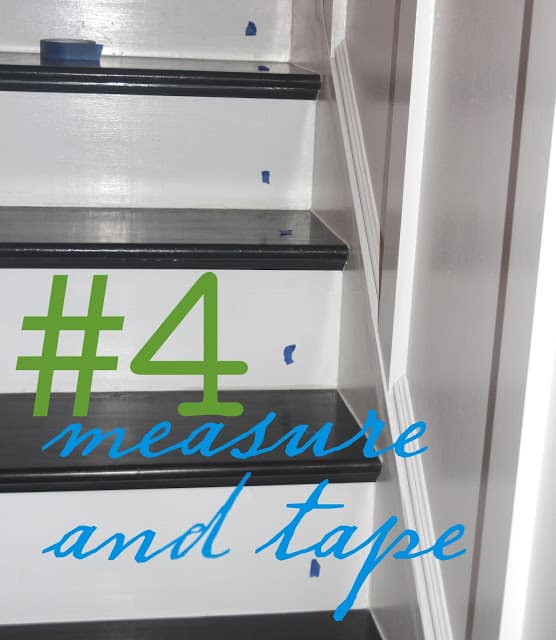 Line up edge of runner with the bottom riser – make sure you are centered or you’ll have to rip it out like me! – and start stapling, starting with the bottom riser’s corner and continuing as close to the binding as possible. I stapled every half inch or so to make it really secure. 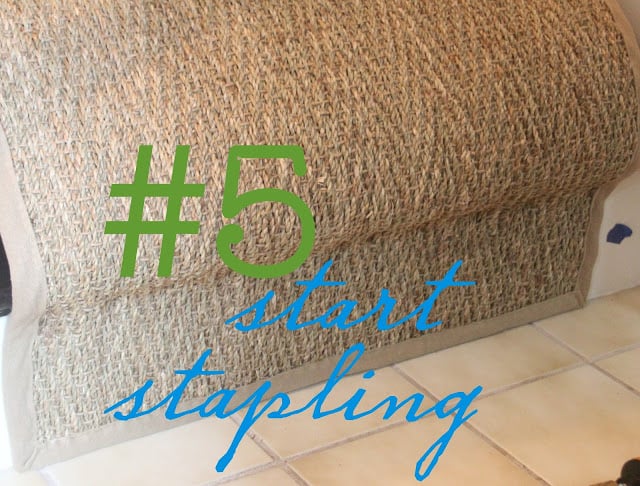 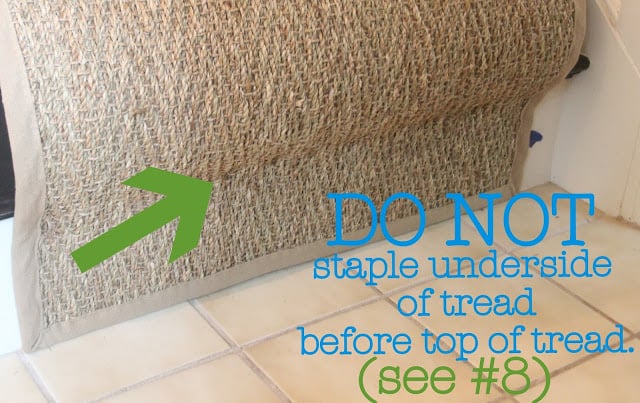 Why? Because stapling the runner under the tread after it has been secured to the step above means that you can make the runner very tight fitting. I chose this tailored look because I was concerned about excess runner causing slips, but you can also go with a “waterfall” installation – examples at end of post.

Pull runner up and over tread, and staple a front corner. Staple at 1/2″ intervals to make very secure. I stapled with the weave of the runner to hide the staples as much as possible. 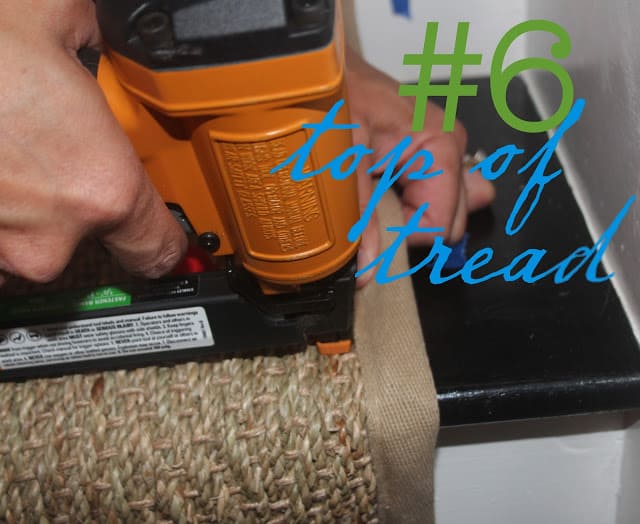 STAPLE BACK OF TREADS 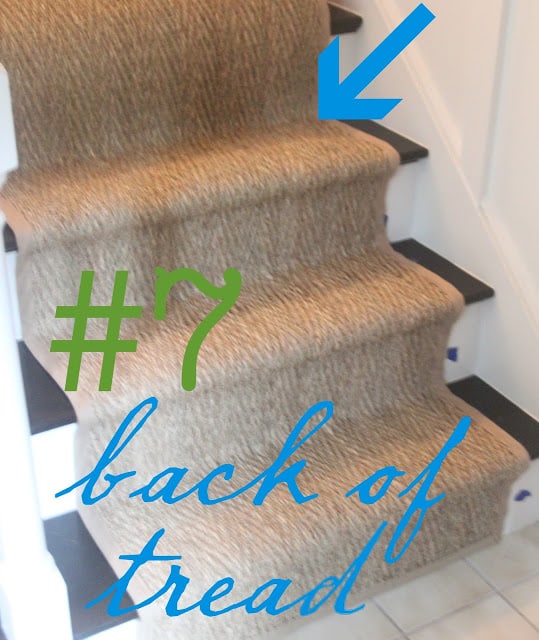 I actually used the tip of the nailer to pull the runner tightly before stapling. You can also use this tool to make each corner as tight as possible (found at most home improvement stores).

STAPLE BACK AND SIDES OF TREADS
When you reach the other side of the tread, follow the binding, securing the edges of the runner. 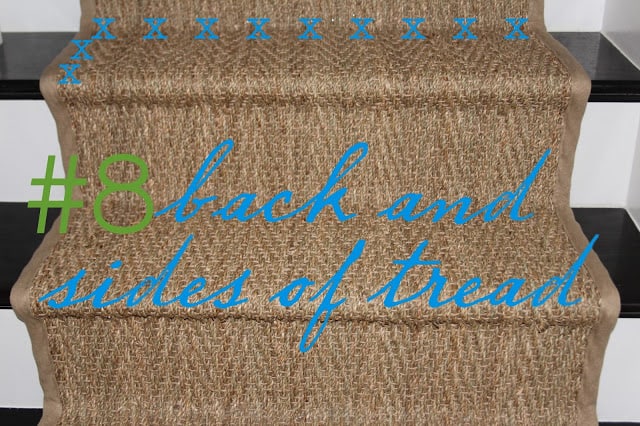 STAPLE UNDER TREADS
NOW it’s time to make the step nice and tight by stapling the excess runner under the tread. With your hand, push the runner over the edge of the tread and staple underneath (the TOP of the lower riser) to make the step very tight fitting. 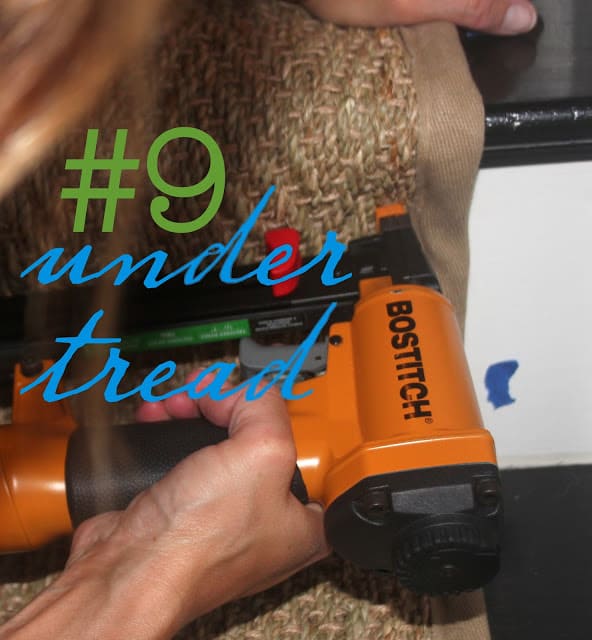 When you get to the top of your stairs, don’t staple the runner to the last step just yet. First, hold the runner up to the top of the final riser and mark it on both sides where it should be cut. Then using a T-square or a long ruler, mark with a Sharpie a straight line, and cut with either a utility knife or scissors. I used scissors for mine and while it was arduous and surely dulled the scissors, it worked just fine. I found using the utility knife to be more difficult. Cutting the runner is the hardest part but you can do it!! 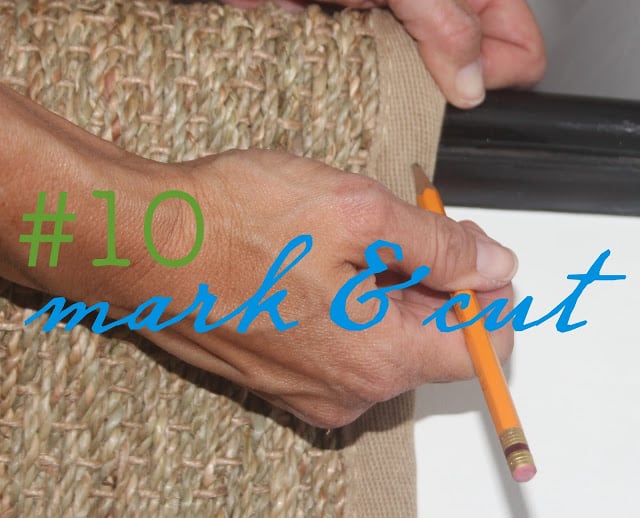 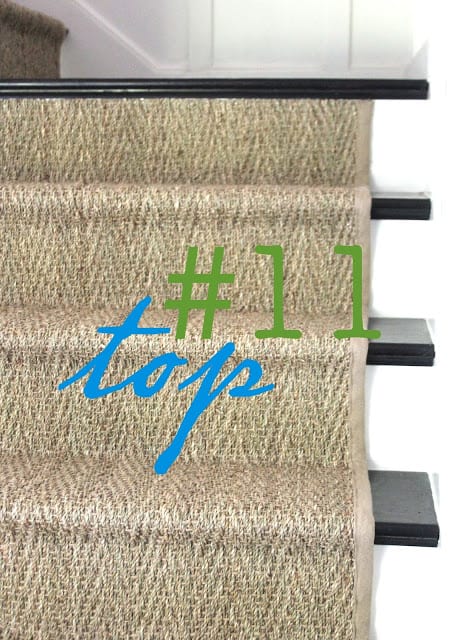 TWELVE
COVER TOP EDGE WITH TRIM
If your cut line was not perfect or you can see the staples at the top of your runner, you may want to cover the cut edge with a very small piece of trim*. (I did this on the upper part of our stairs, after the landing, because the cut line wasn’t great. The lower portion of the stairs came out really well, so I didn’t add trim there.)

To add trim, I cut it to size and painted it to match the tread above (the tread is stained a very dark brown, but reads black, so I just painted the trim black*).

Then I HOT GLUED the trim right over the very top of the seagrass runner. I also took the time to caulk between the trim and the tread and give this piece a finish coat of black paint (oil based for durability). The trim is not even detectable – you’d only know it was there if you looked at it very closely, or took a picture with a flash :). It just looks like part of the tread, and I love that it finishes off the look of the runner.

*If you are adding trim to cover your cut line, I recommend something very narrow and lightweight. You can paint or stain it to match the tread above, or you can stain it the same color as the seagrass runner if you want to blend it in even more. 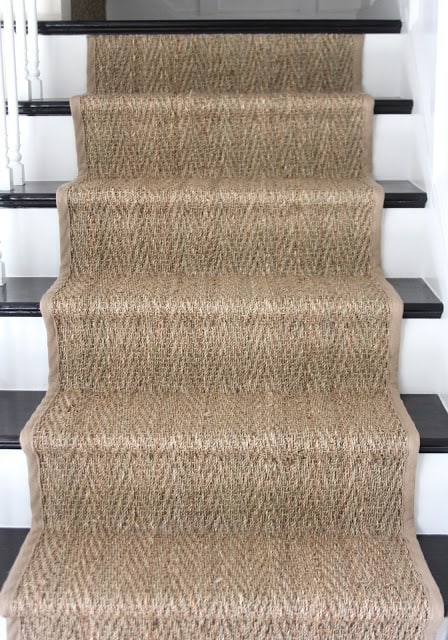 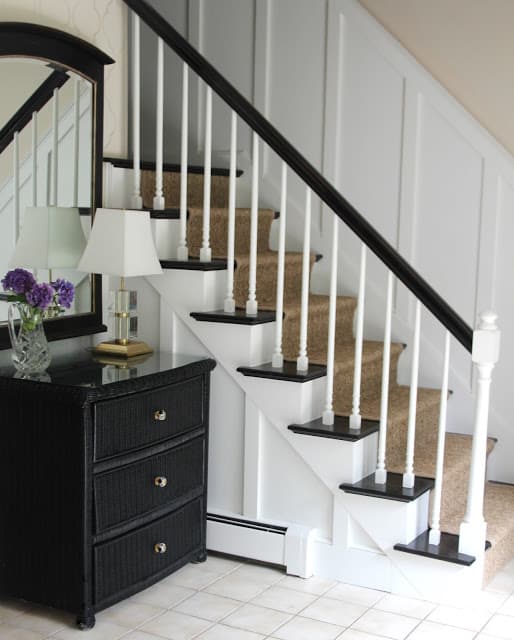 SOME THINGS TO CONSIDER

STYLE OF INSTALLATION.  You can opt for the “waterfall” style (on the left), or the more tailored look (right) in which the runner is stapled under the tread. I chose the tailored look on the right, because the runner on the first few steps I installed felt a little looser than I wanted.

You can also achieve a nice tight fitting where the tread meets the riser by using the tool I mentioned above. 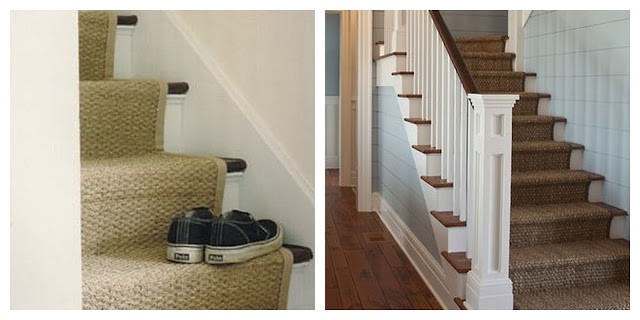 BINDING OR NO BINDING?  I went with a binding because the seagrass herringbone runner I liked came at a good price with the binding. It wasn’t a deal breaker for me – I could have done without. I bought one long runner and cut it into 2 parts for my lower and upper stairs, which meant that one part of the stairs has the binding and the other doesn’t. I chose to put the binding on the bottom of my steps, with the cut part at the top. I don’t think there is a right or wrong here. 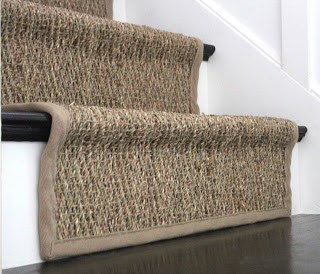 SLIPPERY? Several people had heard seagrass on stairs was a bad idea because supposedly it would be more slippery than a regular runner. I actually think the opposite is true.  In my last two houses we had wool carpet runners and over the years the kids and I slipped on them, and years ago my husband slipped down a bare set of wood stairs and broke a toe (the day before he had to be in a wedding!)  The seagrass runner has texture and I have not found it to be slippery at all in the month that we’ve had it installed.

COMFORTABLE?  Seagrass is definitely NOT as soft and comfy as a regular carpet. However, we’ve had natural fiber rugs in our homes for years and we don’t mind the texture, even on bare feet.

DURABLE?  No doubt about it, seagrass is great for not showing wear. With the 9×12 area rug we owned for over a decade, the only stain I wasn’t able to overcome was dog pee, which also left a smell that could not be eradicated. We used that rug in our dining room and then our living room and it saw a LOT of traffic over the years, and held up wonderfully. Since our dog doesn’t go up stairs, I wanted something that would stand up to the heavy traffic this family of 5 gives the stairs. Durability is the #1 reason I chose it for our stairs (okay, #2. I really just love the look!)

I think it’s important to note that my installation is not perfect. This was my first stair runner installation and I learned as I went. The upper portion of my stairs, after the landing, is off-centered even after I measured 700 times, because I got cocky and didn’t use tape as a guide  (see the #12 photo). You can’t see that part from the foyer, so I’m okay with it.

All in all,  I think it all came out pretty good, and I am my own worst critic. I am glad I tried it – and I am especially glad at the money I saved by doing it myself!!

UPDATE
Check out this post on how our runner held up a year and a half later, 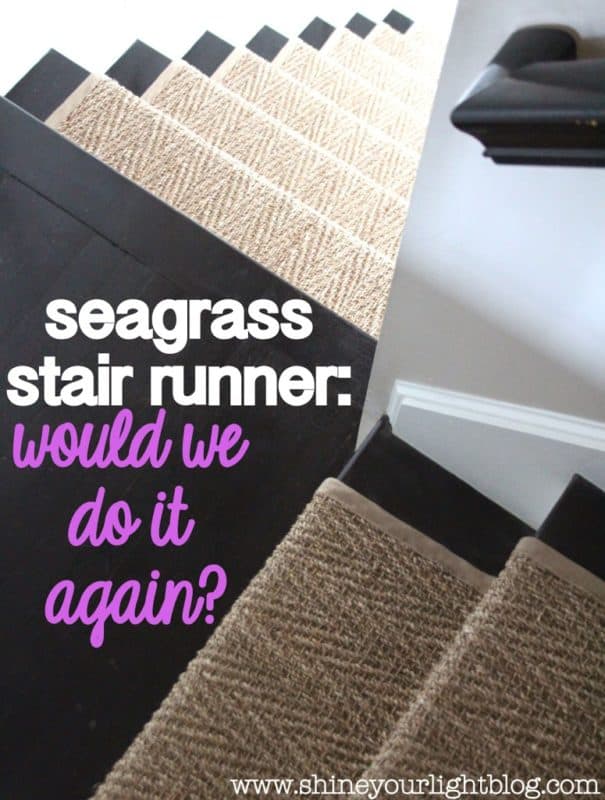 and this post is full of tips on what kinds of runners to avoid, issues to be aware of, and affordable runners I recommend for you to install a runner yourself.