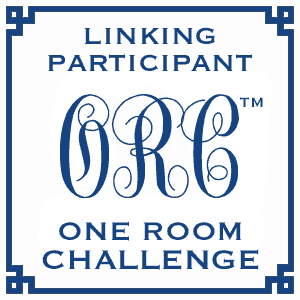 Today marks the halfway point for all us One Room Challenge Linking Participants (ORCLPs! Woo hoo!!)  Did you catch the 20 ORC designers and what they’ve accomplished in week three? There is some true awesomeness happening out there. It’s been so fun to see everyone’s progress.

If you’re new here (HI and welcome to my little world of crazy), for the ORC I am building a wall of bookcases in my living room. There are SO many ways you can customize a bookcase between molding, wood and paint. It’s all about the details. Today let’s talk about

It’s something I have pondered for a loooong time leading up to finally building these suckers. There are so many interesting options……. 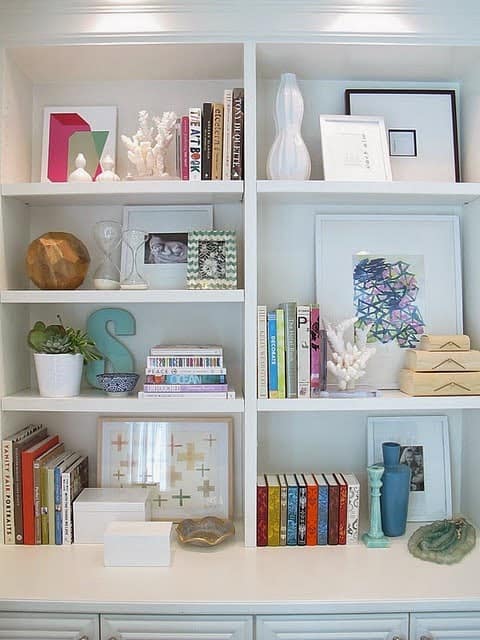 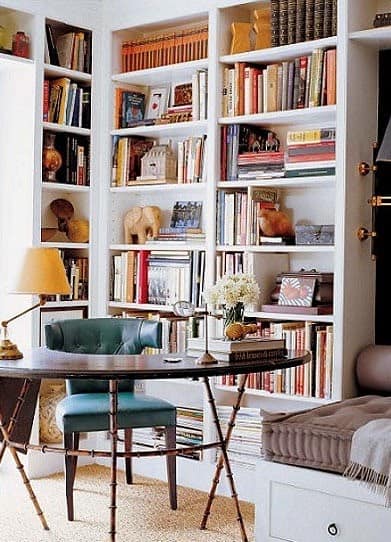 {Source Unknown}
a pattern via fabric – 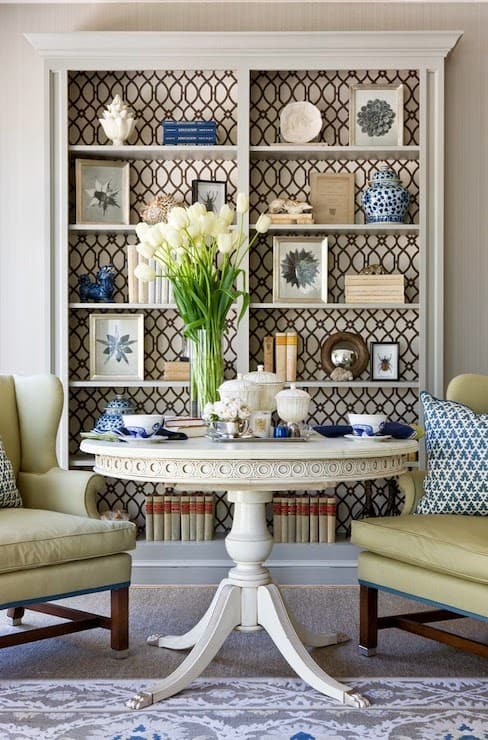 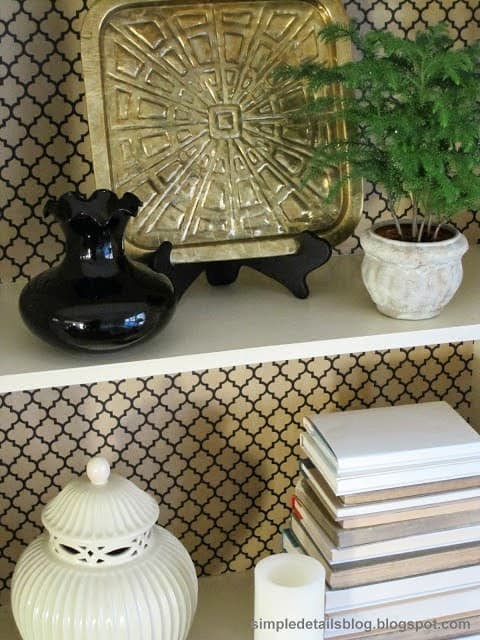 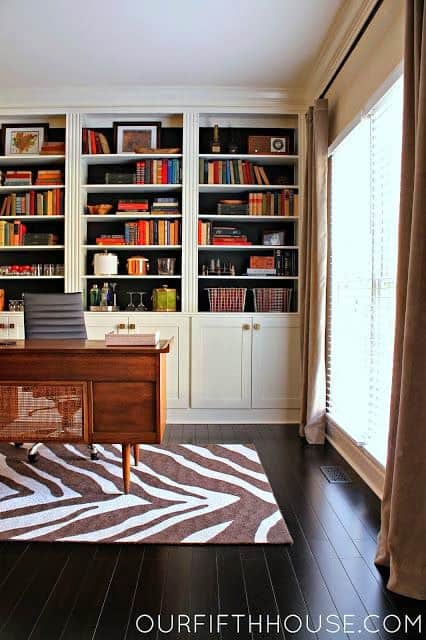 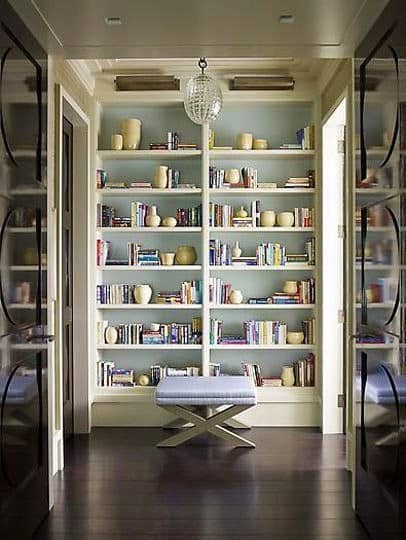 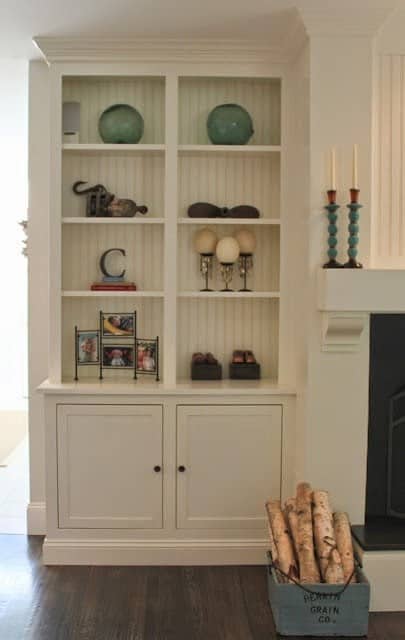 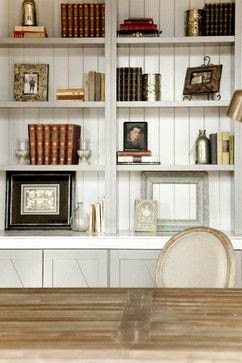 {Private Residence in Provo, UT via Houzz}
beadboard AND an accent color…… 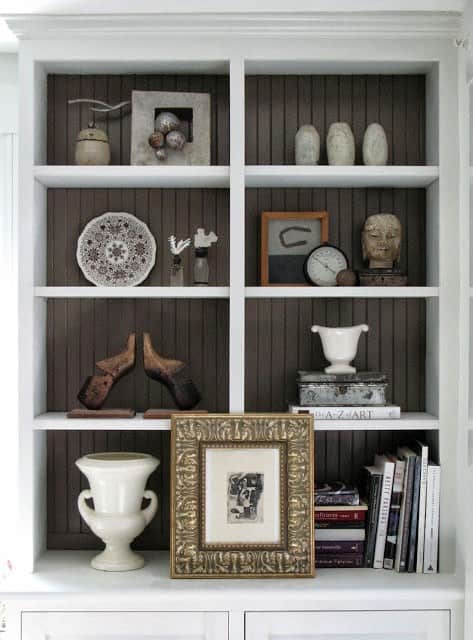 {An Urban Cottage}
If I was going with just an accent color I would have painted the panels that came with the Ikea bookcase, like Kate aka Centsational Girl did. 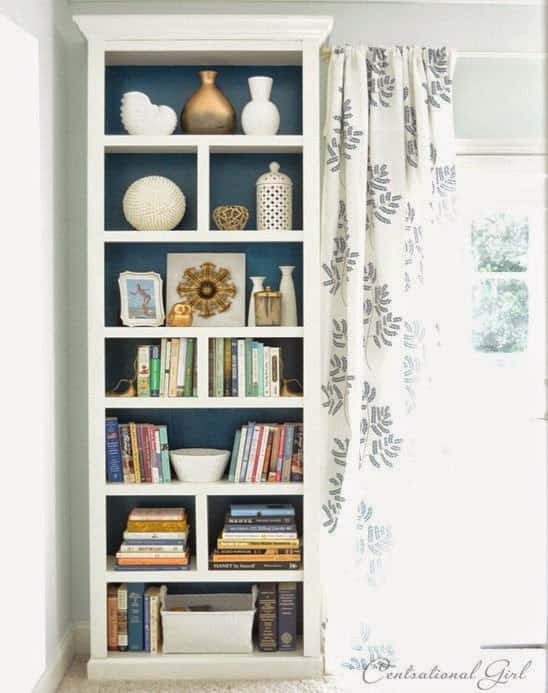 However, one thing I knew from the start is that I wanted planking of some sort. 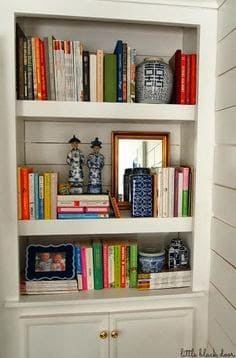 {The last ORC project by Elizabeth at The Little Black Door} 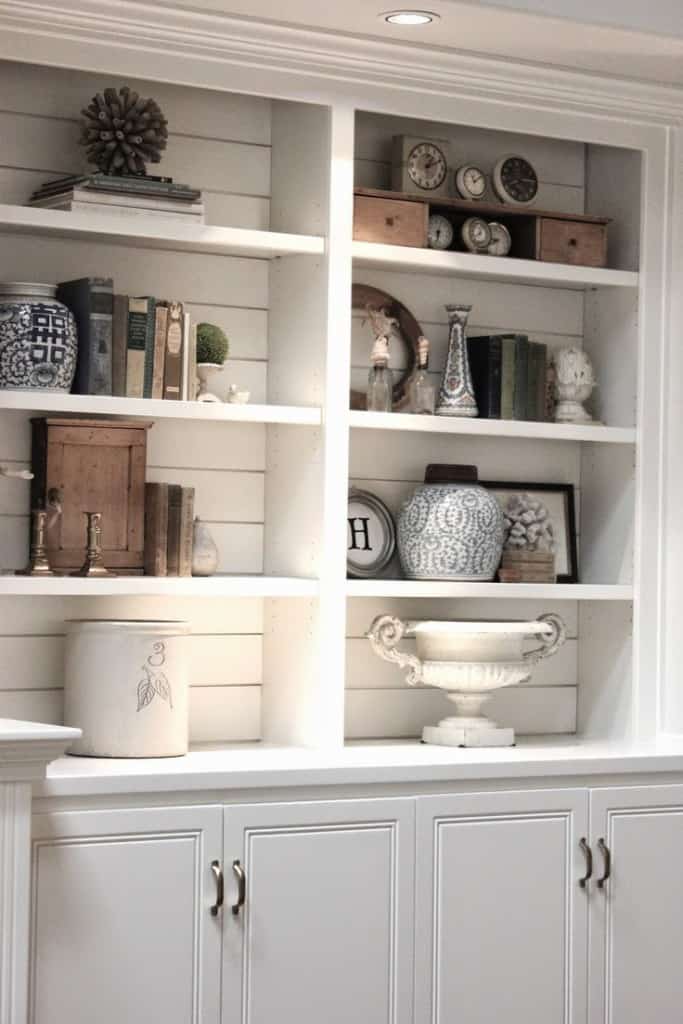 Since there was already a groove in the back of the Ikea bookcases for the panel it came with, I decided to go with a paneled sheet of hardboard. Sheet paneling is widely available, and depending on your project there are lots of different ways you could go. I contemplated using real wood beadboard that is about $40 a sheet (Lowes or Home Depot), but decided on hardboard.

I had the sheets cut at Home Depot, so the grooves were horizontal. 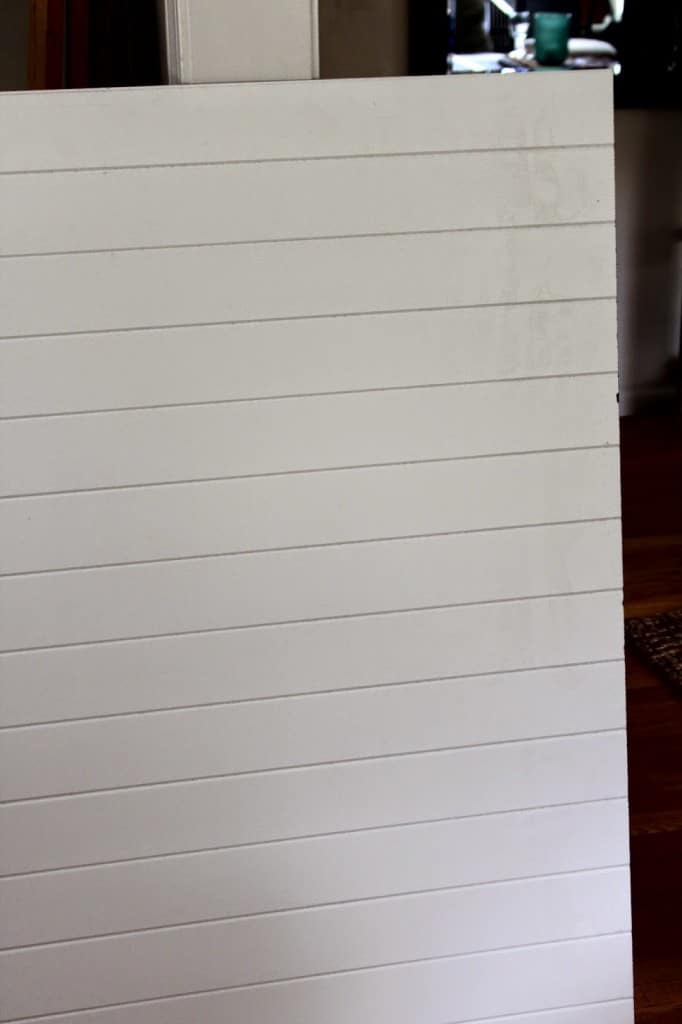 Here I want to pause and tell a DO THIS, NOT THAT story to those of you that have any inclination to build Ikea bookcases and change out the backing board.

Since the hardboard (left) was wider than the Ikea panel (right), 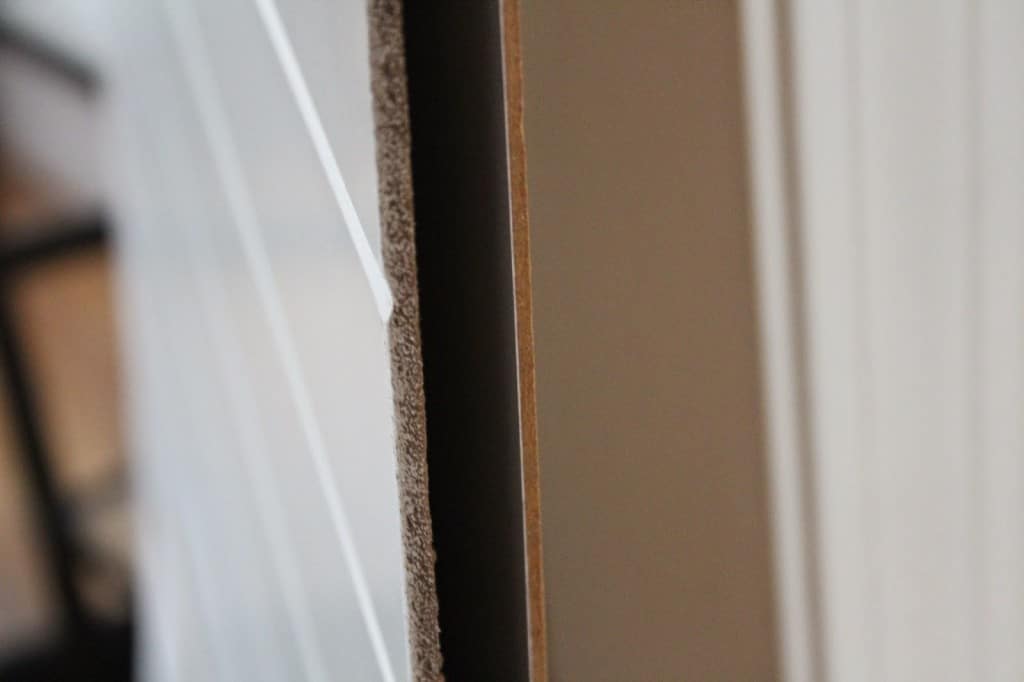 I bought a 1/4″ router tip for my Dremel and made the grooves on bookcase sides larger. 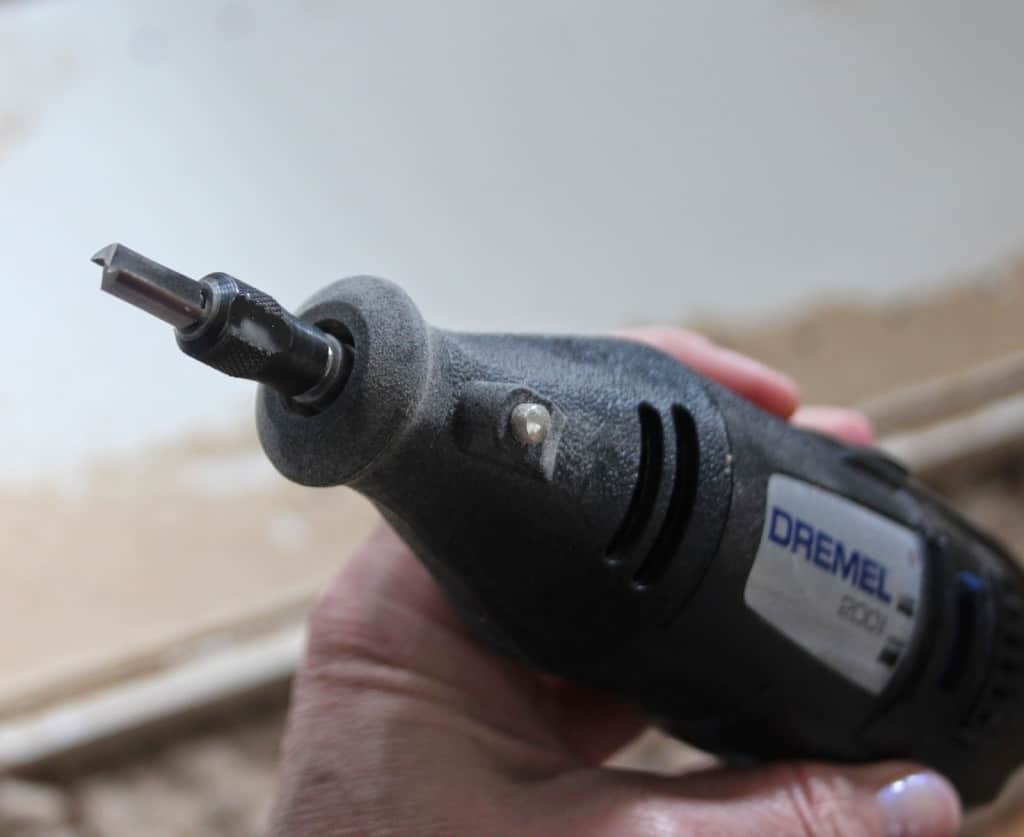 Below on the floor (um, hi, a dropcloth might have been smart here) is the side of the bookcase with a shelf in the middle. The left is the groove the bookcase came with; the right is the humungous mess I made by rerouting the groove. 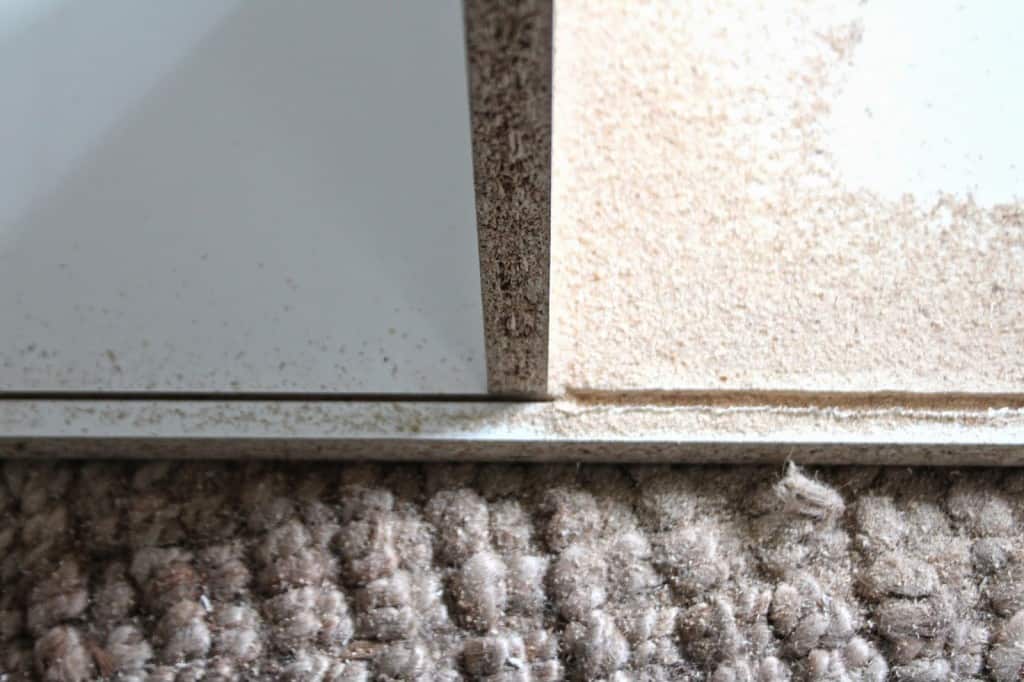 I would strongly recommend NOT doing what I did unless you have a real router tool. Rerouting the grooves with the Dremel made for uneven grooves, plus the bookcase is coated in laminate, which bunches up and makes a big fat mess, and the Dremel is hard to control. 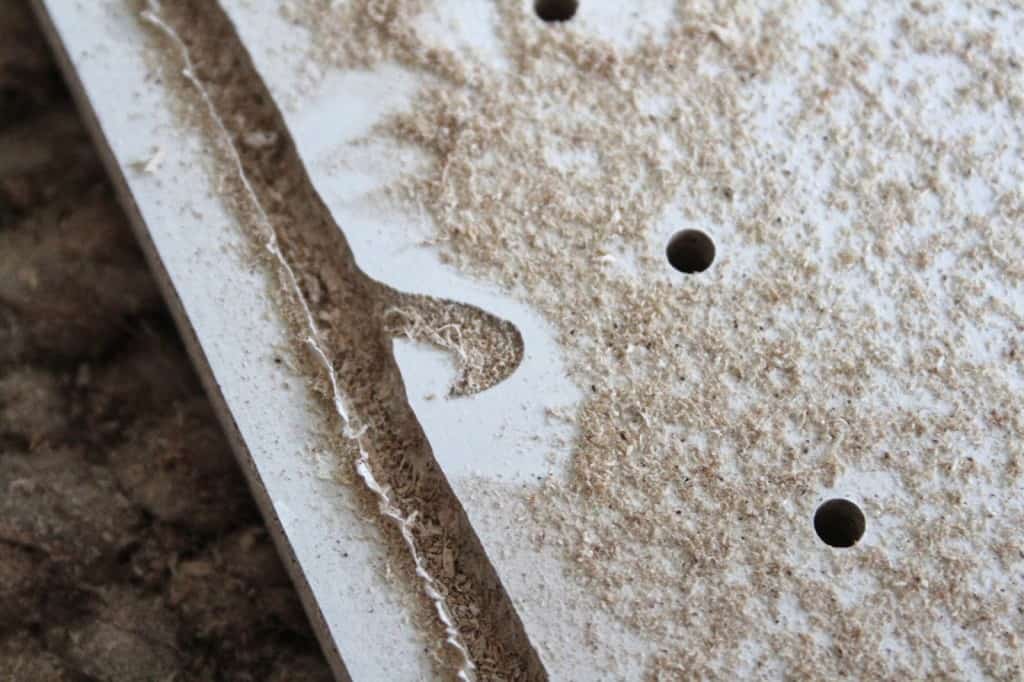 Since I already had the hardboard cut to fit the back of the bookcases at HD, I had to forge ahead and route all three Ikea bookcases in the same manner. This was the worst of my rerouting….I got a bit better at controlling the Dremel as I went along….but oh, this is not pretty. 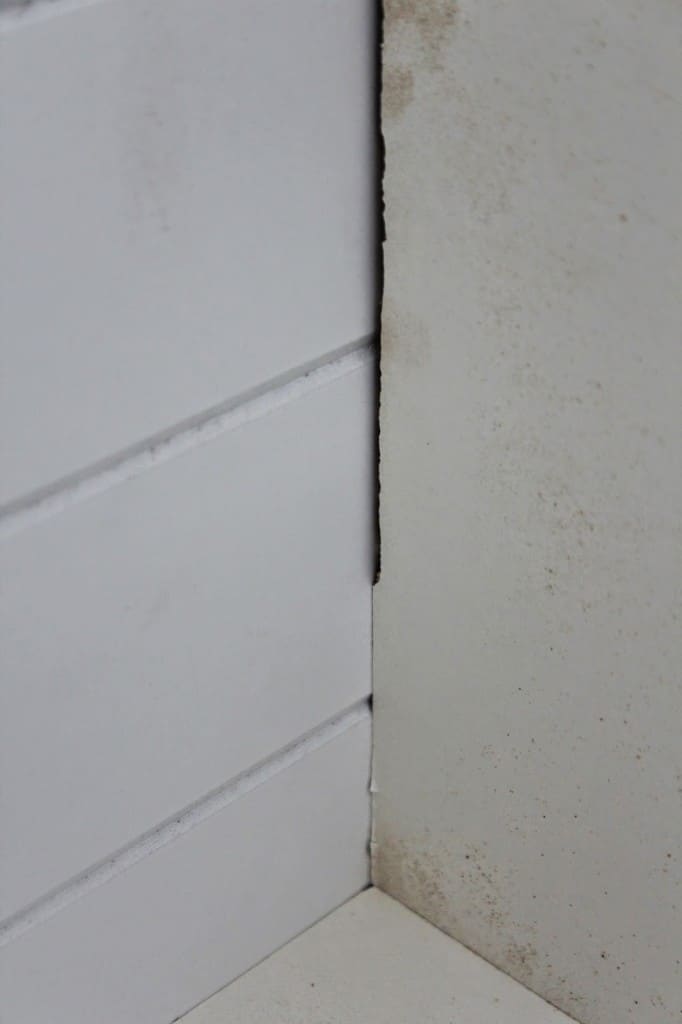 IF I HAD IT TO DO OVER AGAIN I would fill the existing grooves with putty, have the panels cut to fit the outside back of the bookcase, and attach them to the frame of the bookcase with a brad nailer, or attach them directly to the wall. WAY less work than rerouting.

In the end, all’s well that ends well. The rerouted grooves were the perfect size for the panels, and after a bit of caulking, there is no evidence of my poorly executed rerouting. 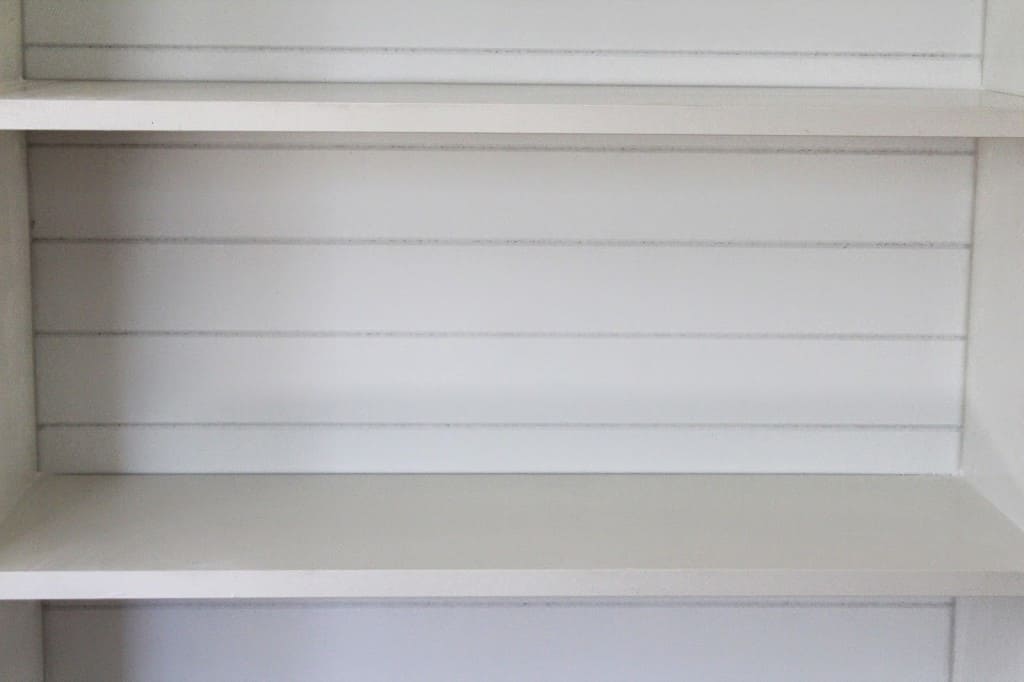 I LOVE that little detail that the panel adds, so it was worth the learning curve. Also, I was deeply considering painting the paneled backs either black or some bluey green, but in the end I decided to keep them white, at least for the time being.

That’s it for today, next week I’ll show you how I’m trimming out the bookcases to give them a custom finish.

Now I’m off to Calling It Home to see how all the other ORCLPs are doing – join me!