Top
Hello lovelies and welcome to the week before Christmas!
I hope you had a wonderful weekend and found some time to check out all the wonderful
12 Days Of Christmas Tours! Today
Cindy at Rough Luxe Lifestyle and Sarah at Simply Sarah Style
share their beautifully decked out homes,
tomorrow we’ll share some highlights and then Wednesday you’re invited to link up your home! 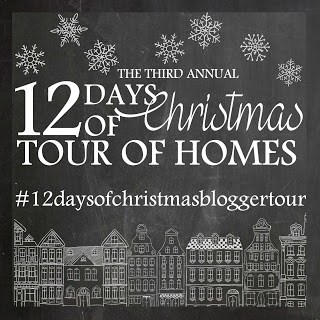 Whilst the rest of the world is shopping, wrapping, baking and preparing for Christmas, what am I doing? Fireplace remodeling, of course.
Because why not make a busy time of the year even more kooky!
If we’re friends on Instagram you have already seen a lot of action shots of this project, but I thought I’d take a break from chatting about Christmas to fill all you DIY lovers in on how this project is progressing!
Although we were really thrilled to have beautifully built cabinets next to the fireplace,
the design is something we’ve been thinking about tweaking ever since we moved here 5 years ago. 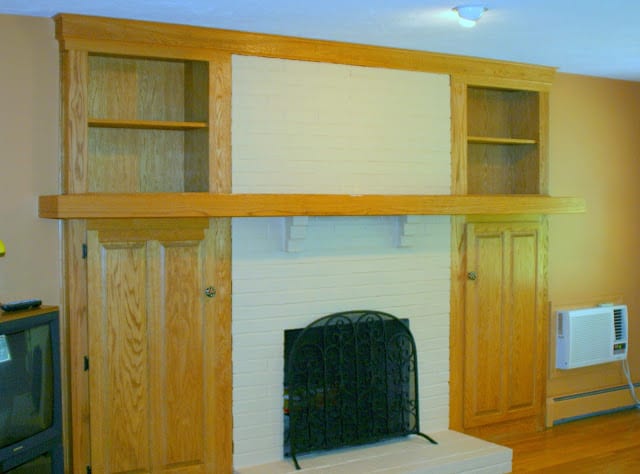 Initially I just went to town priming and painting everything white
(the hearth ended up glossy, and then flat black, because we use the fireplace for 6 months out of the year and white was really hard to maintain.) 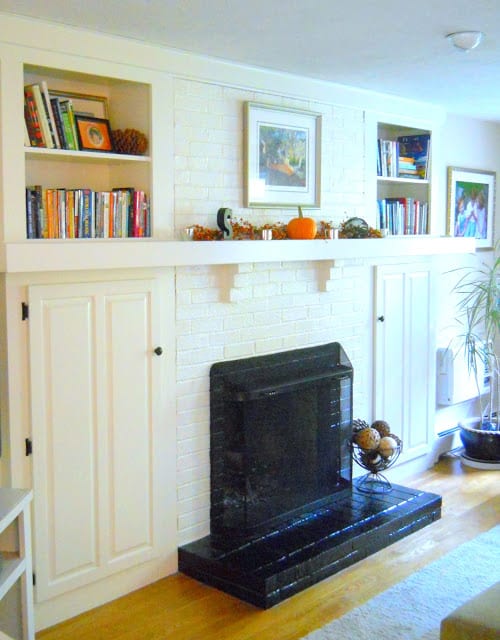 The big issue with this room has always been where to locate the TV. With doorways on both sides of the room, the layout options are really limited, and so since Day 1 we talked about mounting the TV over the fireplace. Unfortunately the mantle and cabinets were built before flat screen TVs were a thing, and so the mantle was at least a foot too high. 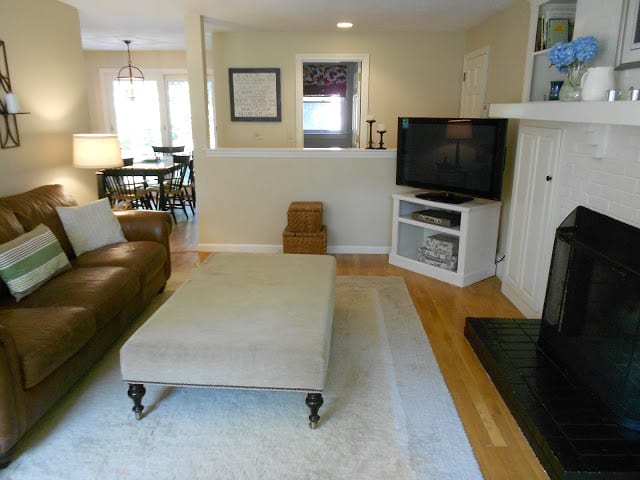 The TV has lived in this corner for FIVE years.
This was the view when you walk into our house from the garage. Just, no. 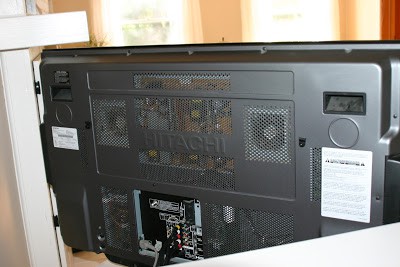 This year when we got some bids on our kitchen renovation, I asked a contractor to quote me on a fireplace remodel that would keep our existing bookcases and tweak the design. Are you ready?
$9,500.
Womp womp.
I completely understand why this estimate is so high. Remodeling requires a LOT of time and labor and I truly appreciate fine finished carpentry and the expertise of professionals.
Plus we live in New England where the cost of living is exorbitant so there’s that.
However $9,500 was just not going to happen – we need those funds in the
Replace The Bologna Kitchen Countertops Fund.
I knew we could tackle this one ourselves.
A few days before we were to host Thanksgiving, with Peter’s bedroom remodel behind me, Mark and I were chatting about what should be up next for home projects and I mentioned that I felt bad that the ONE thing he really wanted to tackle since the day we moved in here was still undone. I had already drawn up plans and showed him some inspiration pictures, and the next thing you know, my nutty husband is tearing off the mantle with a crowbar!! 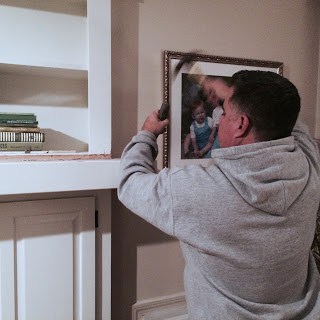 It’s been a long, LONG time since Mark has worked on a DIY with me, and I was overjoyed that he wanted to jump into this one!
Okay so here is where the fun starts!!
One of our main inspirations, by Tiek Built Homes. 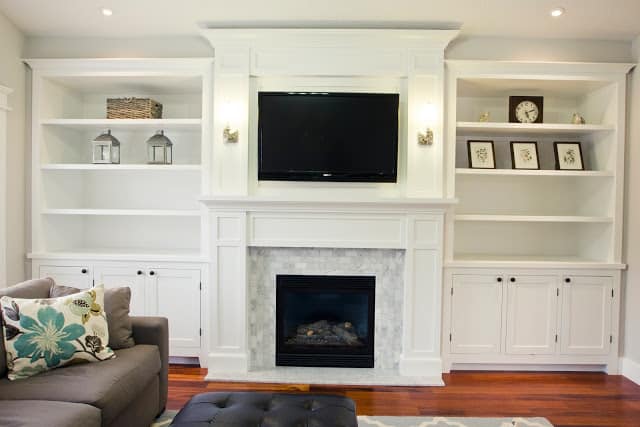 To get from here to there……
The Good, The Bad & The Ugly
We ripped off the mantle, which took 3 solid hours because whoever built it, built it to last for many years. The mantle and side cabinets are constructed of solid oak (very hard and high quality), and the entire job was extremely well glued and joined.
We also had to knock out the brick corbels under the old mantle. 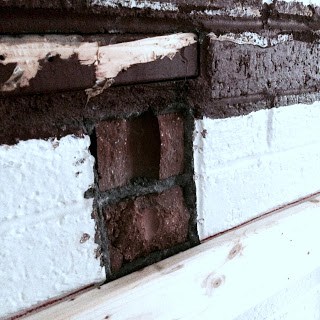 Demolition was a HUGE mess and a TON of very physical work, way more than I anticipated,
but so worth it!! 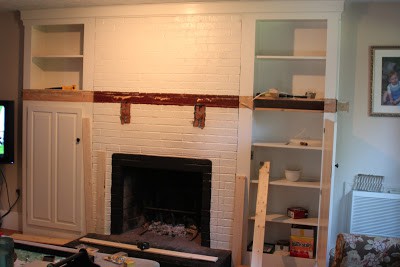 During demo we were careful to preserve the oak so we could reuse it. I spent eons pulling all the nails out each piece of wood using this Quick Tip Tuesday method.
Here is a glimpse into the scope of the project post-demolition
(you will notice we did a lot of things out of correct order….making changes as we went along.)
We attached furring strips to the brick using a Ramset tool that shoots heavy duty nails into brick, built a surround that was attached to the furring strips, and constructed a new mantle piece by piece. 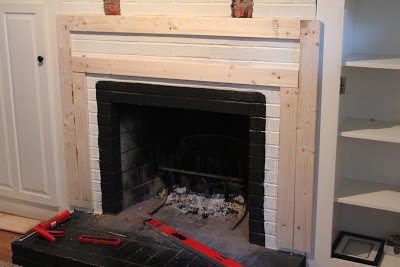 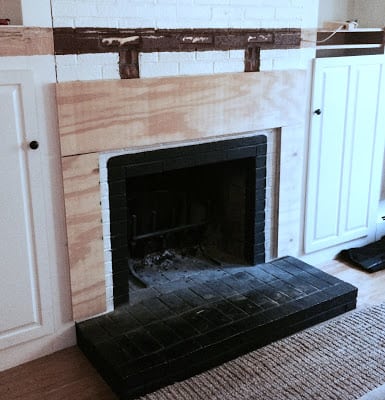 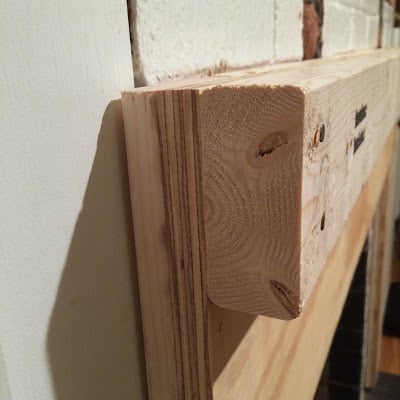 I tiled over the brick surround with marble tiles (so exciting!!! More on this later!) 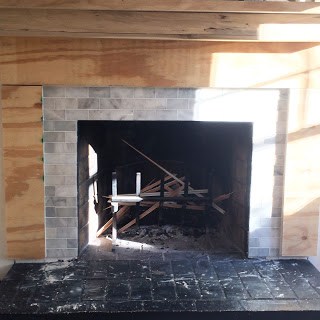 Then I primed everything, slapped some white paint on the hearth, prettied it all up with a lot of flowers and candles, and we hosted Thanksgiving! 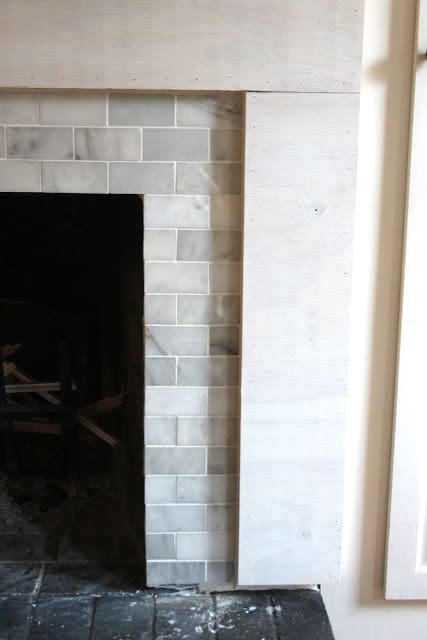 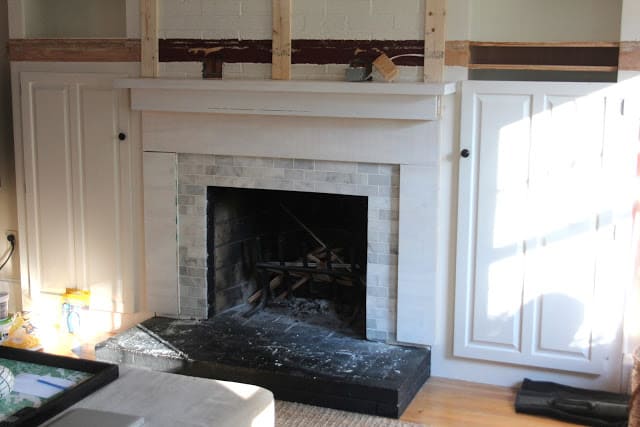 After Thanksgiving, we built the upper part of the wall in the same fashion as the lower – furring strips attached to the brick, and then built out from there. There was an outlet in the old mantle, so we had to reroute the wires for that, and while we were at it we routed the cable wires through this upper portion as well so that we can eventually hide the cable box in the side cabinet. 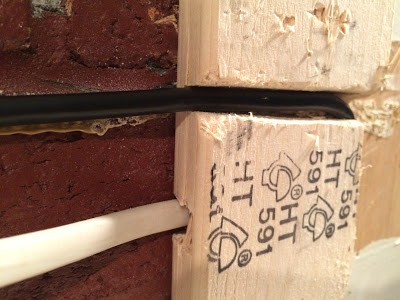 Then the fun part – adding the trim to the top and bottom. This is where we really started to see the vision come to life! 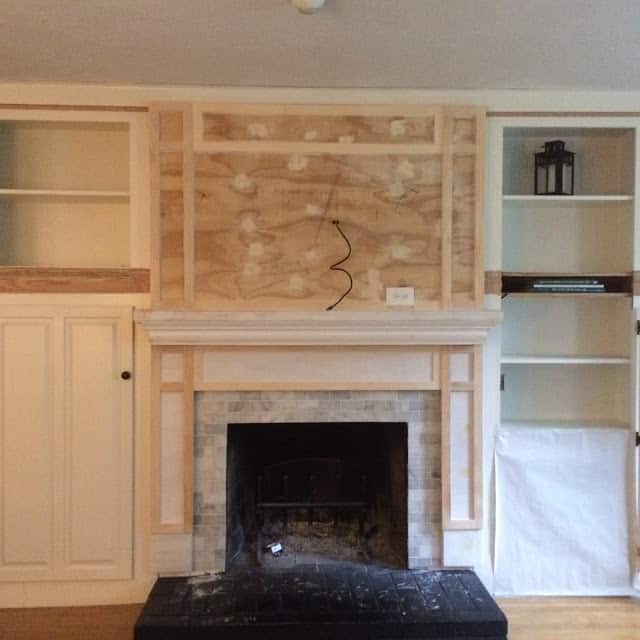 One weird roadblock we hit was the discovery of, on each cabinet, a box that the old mantle was attached to that consisted of two boards close together creating an awkward gap. I spent an entire day removing one board from each side by trial and error. After a lot of blood, sweat and tears, I finally got them out. 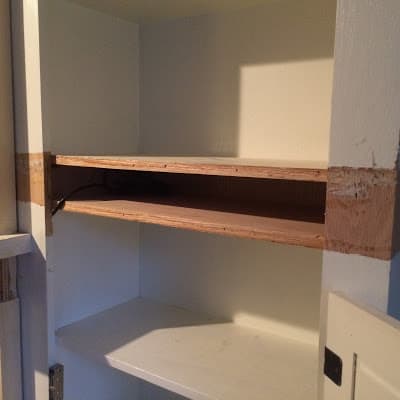 The shelves are built into the sides and were joined with glue and nails.
This job required some hardcore ABBA on Pandora to help me persevere,
and I finally got those suckers out. 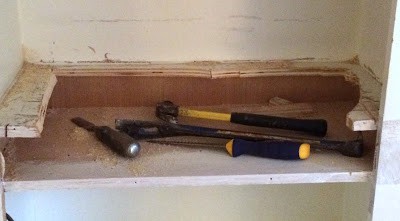 I moved on to trimming out the surround, filling nail holes, and caulking for DAAAAYS.
Although it is so tedious, the finish work –  trim, wood filling and caulking –
makes SUCH a difference to the end product!!! 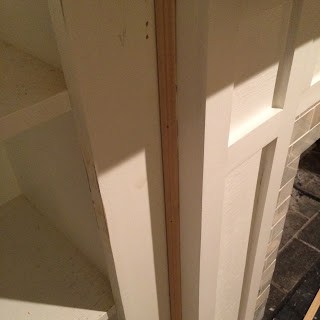 All the unfinished wood was primed, everything got a good sanding, and then finally it was time for paint. Homeright was kind enough to send me a Finish Max Pro paint sprayer to try during the One Room Challenge and I used this for the whole fireplace surround.
This was an exciting day!!!! 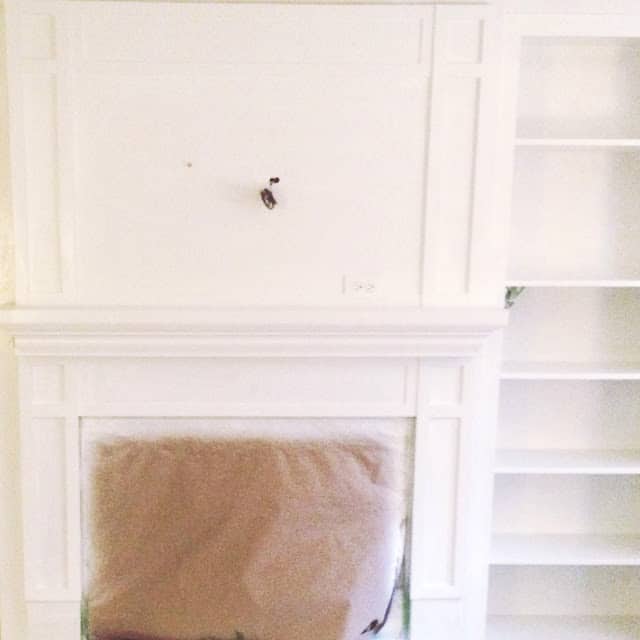 I’ll share more about spraying the surround soon.
TV Mounting
The plan from the get-go:  mount the tv over the fireplace. This part of the project deserves a post of it’s own, but let’s discuss the design aspect of it for a moment. It was a huge undertaking to get the bracket installed into the brick and mount the TV, and then while Mark was tweaking the tilt of it, I stood back in disbelief. Even though I had measured the width of the bracket and the TV before even starting the remodel, it protruded so much more than I was imagining!! 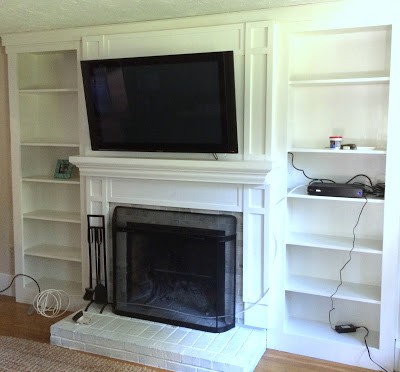 Our TV is a plasma which apparently is not even made anymore (how can it be a relic – it’s only 8 or so years old?!!!)  LCD TVs that are sold today are much thinner and so eventually when this one dies, a new TV will have a slimmer profile. In the meantime, I’ve gotten over how chunky it is because this is, after all, our TV room, and the room feels so much better without the TV in that awkward corner!
Finishing Up
The last few pieces of this remodel:  installing crown moulding at the ceiling (I keep putting this part off), adding doors to the lower two shelves on either side, and the hearth.
I was planning to build cabinet doors but am thinking about having them made.
The jury is still out on this decision.
As for the hearth, I visited some stone yards to get estimates on granite, blue stone and slate slabs to go over the existing raised brick hearth. We were planning to go with a dark hearth because we use our fireplace so much, but the more I thought about it, the less in love with that idea I became. 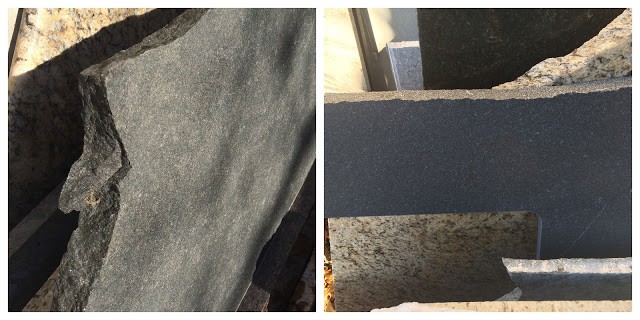 Our feeling on the hearth is to go with what we REALLY want because this is not something we are likely to change for a long time. Or ever. The slabs are in the ballpark of $350-$600 depending on material (with us installing it), and we had already decided that we were willing to spend some money on this aspect of the remodel considering we are DIYing the whole thing and saving on labor.
But do I love this look with my new marble tiled surround????
I am also keeping in mind what we are gravitating towards for our future kitchen, as we want the two spaces to be harmonious.
There was another option I kept coming back to, and after thinking it through for a couple weeks, I’m going for it! It’s the one I love the best and Mark is on board.
I’ll share that piece of the fireplace remodel puzzle with you soon!!!!!!!
So here we are as of my Christmas home tour last week (please excuse the haphazard bookcase styling). We are SO excited about this project and glad that we took the plunge to refinish it ourselves. I’ll share a final before and after with you soon! 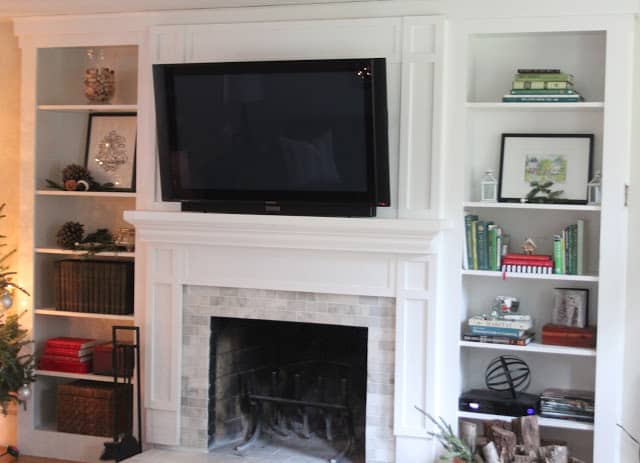 If you made it this far thank you for following along on my DIY adventures
and I hope you have a wonderful week ahead friends!
Thanks for visiting!

12 Days Of Christmas Tour Highlights!
A Peek Into Our Christmas Home